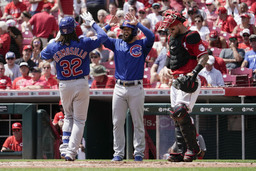 "If you can come out of there with a series win you feel really good, and it feels like it's been a little while since we've done that," Cubs manager David Ross said. "That was really just a good offensive team. Our pitching showed up."

Frank Schwindel and Rafael Ortega also drove in runs for the Cubs, who ended a 12-game skid a day earlier. Schwindel, Chicago's regular first baseman since Anthony Rizzo was dealt to the Yankees at the deadline, had six hits in the series and is batting .329.

Adrian Sampson, called up from Triple-A Iowa earlier in the day to pitch in the majors for the first time since 2019, held the suddenly quiet Reds to one run and five hits in four innings.

After exploding for 14 runs in the series opener Monday night, Cincinnati managed a single run in each of the last two games.

The Cubs banged out 12 hits and won for the fourth time in 19 games since trading stars Rizzo, Kris Bryant, Javier Baez and Craig Kimbrel.

Happ's first-inning homer was his second in as many games. Hermosillo, called up from Triple-A on Tuesday, slammed a 441-foot, two-run bomb into the upper deck in left field during a four-run second.

Tyler Naquin homered in the second, the only time Cincinnati got a runner past second base. The top five Reds hitters combined to go 1-for-19.

"We know every game takes our best," Reds manager David Bell said. "Today (Sampson) pitched a good game against us. He threw the ball inside, and did a good job against the top of our lineup."

BATTLING FOR A ROLE

Sampson said he knew when he was called up that he could stake his claim for a spot in Chicago's rotation.

"Right now it's almost `Game of Thrones'-esque," he said. "We're being asked what kind of role do we want to play in this organization going forward. It's ours for the taking. If you want it, you got to go get it. I really want this job, and I'm going to do everything I can to be successful."

Hermosillo's only other major league homer was on Sept. 28, 2018, when he was with the Los Angeles Angels. The opposing pitcher for Texas was Sampson.

"I didn't feel like that was something I should bring up," Hermosillo said. Sampson said he didn't realize it until Wednesday.

SHORTSTOP OF THE FUTURE?

The Reds are getting their first good look this season at their top minor league prospect, Jose Barrero, who had been tearing it up in the minors. Barrero - then known as Jose Garcia - was with the major league club last season for 24 games but hit poorly. The 23-year-old was recalled Tuesday after hitting .303 with 17 home runs and 62 RBIs at Double-A Chattanooga and Triple-A Louisville. He got the start Wednesday and went 2 for 3 with a walk, including a ninth-inning double.

Cubs: After a day off, Chicago returns to Wrigley Field to open a weekend series Friday against the Kansas City Royals.

Reds: Right-hander Luis Castillo (6-12, 4.51 ERA) is set to go as Cincinnati opens a four-game set with the Miami Marlins.