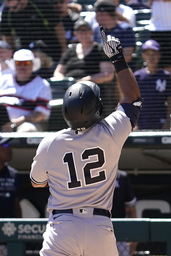 Luke Voit also hit a two-run homer in the ninth for New York, which went 5-1 in the season series against Chicago. Cortes (1-1) allowed one run and seven hits in his first win since Aug. 6, 2019, versus Baltimore.

New York lost the series opener Thursday night on Tim Anderson's two-run homer in the ninth in the Field of Dreams game in Iowa. Following a day off, the Yankees responded with two straight wins.

Manager Aaron Boone said he didn't believe the team was going to break down even when it was 41-40 on July 3.

"I really felt like with this group there is an underlying confidence that has existed even in our worst of days this year," he said. "Maybe at times, maybe not rightfully so, but I do believe they always believed we were going to turn this around and we were going to get them rolling. I don't think that belief ever wavered even in the worst of days."

"Believe me, we were hunting innings, but we tried to be smart and used discretion to protect our outstanding starters then the bullpen came in and held them," White Sox manager Tony La Russa said.

Chicago rallied in the ninth. Zack Collins hit an RBI double before Lucas Luetge was replaced by Wandy Peralta.

Anderson made it 5-3 when he drove in Luis Robert with an infield hit, but Peralta got Cesar Hernandez to bounce into a game-ending double play. It was Peralta's fourth save.

Hernandez, who won a Gold Glove last year at second base, also committed three errors. After Odor connected in the second, Hernandez had a throwing error that allowed DJ LeMahieu to score from first.

Giolito was charged with three runs, two earned, and six hits. He struck out eight and walked three.

La Russa was ejected after Eloy Jimenez struck out looking against Jonathan Loaisiga for the second out of the eighth.

Jimenez didn't like the call, jumped up in disbelief and had words for umpire Mike Estabrook. La Russa then came out of the dugout and was quickly ejected. It was La Russa's second ejection of the season and 90th of his career.

"I wasn't vulgar, but I did challenge his calls and you get ejected for that," La Russa said.

Boone has two adopted children from Haiti, so the recent earthquake in the country has been heartbreaking for him and his family.

"It's a special place to me and my family and obviously, a country that has endured a lot of hardship and this is another blow in that regard," he said. "A lot of connections that we have there to this point are good and safe and was away from a lot of the things we were connected to. And I would just say, continue to pray for that awesome little country."

Yankees: Boone said 1B Anthony Rizzo, out with the coronavirus since Aug. 8, is set for a cardiac evaluation on Monday. If all goes well, he will work out at Yankee Stadium the same day. ... C Gary Sanchez, on the COVID-19 list since Aug. 5, is working out at Double-A Somerset.

White Sox: Utilityman Leury Garcia was placed on the seven-day concussion list, and INF Danny Mendick was recalled from Triple-A Charlotte. Garcia injured himself trying to catch Giancarlo Stanton's ninth-inning home run in the Field of Dreams game in Iowa on Thursday.

Yankees ace Gerrit Cole has recovered from COVID-19 and will start Monday against the Los Angeles Angels. Cole is 10-6 with a 3.11 ERA in 21 starts. The four-time All-Star was placed on the COVID-19 injured list after testing positive on Aug. 3.