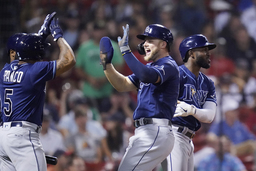 BOSTON (AP) Tampa Bay's Francisco Mejia singled with the bases loaded in the ninth, Boston's Hunter Renfroe made a costly error on the play, and it helped the Rays rally past the Red Sox 8-4 on Tuesday night.

Tampa Bay's lead in the AL East is now up to five games.

The Rays were 2 of 9 with runners in scoring position before Mejia, who entered the game as a defensive substitution in the seventh, delivered a single to right. The ball skipped past Renfroe for an error and that allowed all three runners to score, giving Tampa Bay a 7-4 lead.

"He was ready for it and just laced a big double - whatever it was - right down the line for just huge runs for us," manager Kevin Cash said.

Officially, Mejia was credited with a single and two RBIs and the Rays added another run on Brandon Lowe's single. Louis Head shut down Boston in order in the ninth to finish off the Red Sox, who lost for the 10th time in 12 games.

Lowe also homered for the Rays, who got a two-run double from pinch-hitter Ji-Man Choi to tie it at 4-all in the seventh after Boston had led 4-1.

"For Ji to come off the bench like that and put together the at-bat that he does, it's very impressive and a huge testament to him," Lowe said.

The Red Sox blew a game they desperately needed, coming off a 2-8 road trip that started with a three-game sweep by the Rays in Tampa Bay. Matt Barnes (6-5) pitched the ninth for Boston and took his second straight loss.

"We didn't make pitches with two strikes and they got to Barnesy at the end," Boston manager Alex Cora said. "It's been a grind for him lately and it was a grind for us tonight."

Renfroe hit a three-run homer for Boston in the fourth and Rafael Devers led off the second with his 28th homer of the year.

Eduardo Rodriguez gave Boston a solid start, striking out eight over 5 1/3 innings. He allowed two runs on four hits and a walk, getting pulled in the sixth after Wander Franco's RBI single scored Mike Zunino to pull the Rays within 4-2.

The only other run allowed by Rodriguez was Lowe's 25th homer in the third.

The Rays improved to a season-best 25 games above .500 at 69-44. It was Tampa Bay's 36th come-from-behind victory and the Rays were feeling perfectly comfortable atop the division standings.

"I don't think there's one person in our locker room that thinks there is too big of a deficit to come back from, honestly," Lowe said. "We all believe in each other to go up there and put together productive at-bats and it's just how it rolls. One guy gets on, the next guy gets on and all of a sudden there's a rally going. "

Barnes also took the loss Sunday at Toronto, when he entered with two outs in the eighth and an 8-6 lead before George Springer's three-run homer helped the Blue Jays rally to a 9-8 win.

Cora said Barnes has actually been pitching well and the losing burden doesn't all solely on the Boston closer.

"For us to be better, everybody has to contribute. I think it's more that than anything else. We still trust the guy. We know he's good," Cora said.

Boston fell to 10-14 since the All-Star break and lost its sixth straight to Tampa Bay.

Rays: Reinstated outfield Randy Arozarena from the COVID-19 IL and had him batting leadoff. Arozarena drove the first pitch of the game for a single to center. ... Tampa Bay also placed LHP Ryan Yarbrough on the COVID-19 IL and placed RHP DJ Johnson (right shoulder sprain) on the 10-day IL, retroactive to Monday. Manager Kevin Cash said Johnson could have a slight muscle tear and was getting second opinions. ... After his pinch-hit double tied it in the seventh, Choi was immediately replaced by a pinch-runner because of soreness in his left hamstring.

Red Sox: OF/1B Kyle Schwarber (strained right hamstring, left groin soreness) has been working out and is getting closer to making his debut for Boston, but manager Alex Cora would not say when he hopes to have Schwarber added to the lineup. Schwarber was acquired from the Washington Nationals before the trade deadline and has yet to play for the Red Sox. ... Cora said LHP Chris Sale was still on track to rejoin the team and start Saturday against Baltimore. Sale is recovering from Tommy John surgery and has not pitched in the majors since Aug. 13, 2019.

Rays: Tampa Bay hasn't named a starter for Wednesday's game. Cash said the could go with an "opener" to pitch the first couple of innings, then turn it over to the bullpen, or possibly start LHP Josh Fleming (9-5, 4.12 ERA).

Red Sox: RHP Nathan Eovaldi (9-7, 4.07) gets his first start since allowing a season-high seven runs over 4 2/3 innings Friday in a loss at Toronto. It was only the third time in 22 starts that Eovaldi failed to complete five innings.