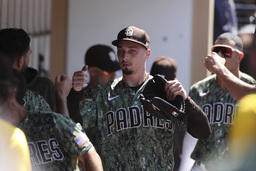 SAN DIEGO (AP) Blake Snell struck out 13 over seven sharp innings, Jake Cronenworth homered and drove in both runs, and the San Diego Padres defeated Madison Bumgarner and the Arizona Diamondbacks 2-0 on Sunday.

Snell (6-4) did not allow a hit until the fifth and won a second straight start for the first time this season. The left-hander matched his longest outing since joining the Padres this year, yielding just two hits and walking three.

"It just feels good coming out of my hand," Snell said. "I've just switched some things up to be more consistent and be more on top of them, make them play a little better. I'm just feeling more like myself. That, plus my confidence being at an all-time high, I'll have games like that."

Bumgarner (6-7) allowed two runs on six hits over seven innings. He struck out five and walked one.

"I thought our lefties did a really good job today against Bumgarner," Padres manager Jayce Tingler said. "He was obviously sharp and efficient and battles every time."

Cronenworth doubled in the first to drive in Adam Frazier. In the fourth, he hit his 16th home run.

"Any way I can help contribute, whether it's on defense or at the plate, that's what I'm here for," Cronenworth said.

Filling in for injured shortstop Fernando Tatis Jr., Cronenworth also made a diving stop to his right and threw out Carson Kelly.

"In everything I've seen Jake do, he's grown at," Tingler said "Whether it's hitting, moving him around on the field and baserunning, he continues to grow."

Emilio Pagan pitched a perfect eighth for San Diego and Mark Melancon worked around a double by Kole Calhoun in the ninth for his 33rd save.

"Blake threw the ball well, and Pagan to Melancon with the defense behind, that was huge," Tingler said.

Nick Ahmed was the only Diamondbacks player to reach third base. He got there with one out in the sixth, but Snell struck out Calhoun and Kelly to preserve the shutout.

The Padres recorded 10 or more strikeouts for the third consecutive game, the third time they have done so this season.

After Yu Darvish went seven innings on Saturday night, Padres starters have thrown seven innings in back-to-back games for the first time this year. San Diego has allowed three hits or fewer in 10 games this season and are 9-1 in those contests.

"To see them line that up back to back for the team is huge," Tingler said. "It's big for the bullpen and it's big for their confidence as well."

Diamondbacks: RHP Noe Ramirez and OF Stuart Fairchild, both on the injured list after testing positive for COVID-19, played catch with each other on Saturday as they recover. Neither player is experiencing symptoms.

Diamondbacks: RHP Zac Gallen (1-6, 4.62) will face the San Francisco Giants at Oracle Park on Tuesday in the first of a two-game set.

Padres: RHP Joe Musgrove (7-7, 2.87) will open a three-game series at Petco Park against the Miami Marlins on Monday.