Marte’s 4 hits lead Oakland to a 6-3 win, sweep of Rangers 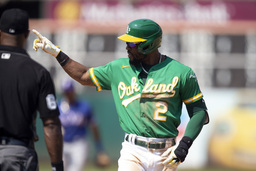 OAKLAND, Calif. (AP) Starling Marte went 4 for 5 with an RBI, Seth Brown homered and the Oakland Athletics beat the Texas Rangers 6-3 on Sunday to complete a three-game sweep.

Sean Murphy and Jed Lowrie each drove in two runs for Oakland, which won its fourth straight game to move into the top AL wild-card spot.

"There's a lot of baseball left," A's manager Bob Melvin said. "The main thing you need to do is just focus on yourself. We're playing better baseball right now."

"I (think) we need to get the bottom of the lineup to be a little bit more productive," Texas manager Chris Woodward said. "Right now, Kiner and Adolis (Garcia) are swinging the bat pretty well, but we need some better at-bats, some lengthier at-bats from the bottom half."

"It wasn't even a thought in my mind today," the right-hander said. "Physically, I feel great. ... To be honest, I didn't even realize I put together a quality start. So I am happy about that."

Added Melvin: "He gives us six innings, only three hits, gets swings and misses, real efficient. After having a little bit of time off, he didn't miss a beat. He pitched in the fashion that he basically has been all year."

The Rangers grabbed an early 1-0 lead when Nathaniel Lowe doubled home Garcia in the top of the first. The A's responded with an RBI single from Lowrie and a two-run double from Murphy in the bottom half to take a 3-1 lead.

Brown launched a 448-foot home run off Rangers starter Jordan Lyles in the fourth inning and Lowrie drew a bases-loaded walk to make it 5-1.

Kiner-Falefa's eighth-inning homer cut the A's lead to 6-3, but Lou Trivino pitched a scoreless ninth for his 18th save.

Rangers: LHP John King (left shoulder inflammation) is scheduled to pitch multiple innings in relief for Triple-A Round Rock on Tuesday. Woodward then plans to ease him back into the Texas bullpen. "We'll have to look out for him," Woodward said. "We wouldn't stick him in the bullpen and just use him on a nightly basis. We would just say, OK, if he pitches, he's going to have a couple of days off to pitch again."

Athletics: Melvin said IF/OF Chad Pinder (strained right hamstring) is on track to begin a rehab assignment around Aug. 15. Pinder has been on the injured list since July 8. ... RHP Mike Fiers (sprained right elbow) is throwing out to 90 feet but is still not close to pitching off a mound. He has been on the IL since May 8.

Athletics: LHP Sean Manaea (8-7 3.26) will start Tuesday as Oakland begins a three-game series in Cleveland. Manaea is 3-0 with a 2.39 ERA in four career starts against the Indians.