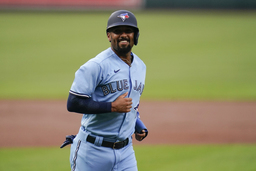 Each team managed only two hits, and Semien got the biggest of all. He connected on the first pitch from Matt Barnes (5-3) for his 26th home run of the season and the first game-ending homer of his career.

"It was amazing," left-hander Robbie Ray said of the celebration that followed Semien's drive. "Everybody was screaming and yelling. It was a fun little experience."

Semien's decisive shot was Toronto's 166th. The Blue Jays began the day tied with San Francisco for the MLB lead.

The Blue Jays have hit at least one home run in 20 consecutive games, the third-longest such streak in team history. Toronto had 22- and 21-game streaks in 2000.

The Blue Jays improved to 8-1 since returning to Toronto July 30.

"It feels like right now that everything is kind of coming together," Ray said. "We're pitching really good, we're hitting, guys are getting on base, we're getting them over and getting them in. We're doing the small things. It's really fun, especially to be able to do it here in Toronto."

The Red Sox have lost eight of nine and have scored five runs or fewer in 14 consecutive games. Before this game, they put slugger J.D. Martinez on the COVID-19-related injured list.

"Overall, we haven't been able to do much," manager Alex Cora said. "It's tough to lose 1-0 but the positive is we pitched better."

The shutout defeat was Boston's fourth.

Kike Hernandez walked to lead off the game against Ray, but the Red Sox didn't get their first hit until Kevin Plawecki's grounded a one-out single through the left side in the fifth. Christian Vazquez followed by grounding into a double play.

Pivetta was perfect through the first four innings before Corey Dickerson lined a two-out single to left.

The Red Sox used a walk and a hit to put runners at the corners with two outs in the sixth, but Xander Bogaerts fouled out to end the threat.

Ray allowed two hits, both singles, in six scoreless innings, lowering his ERA to 2.90. He walked two and struck out five.

Jordan Romano (5-1) pitched a perfect seventh to earn the win.

The Canadian-born Pivetta gave up one hit, walked one and struck out five in six shutout innings.

"Nick did an outstanding job," Cora said. "Every pitch mattered. He stepped up to the challenge."

Boston bench coach Will Venable has tested positive for COVID-19, the team said during the game. First base coach Tom Goodwin is in quarantine after close exposure to Venable, and quality control coach Ramon Vazquez coached first base. Cora and Red Sox coaches wore masks on the field and in the dugout, and some Boston reserves were also masked. "We've got to take care of our group," Cora said. "For now, we'll do our best to wear masks in the dugout and, obviously, inside."

RHP Jose Berrios (8-5, 3.31) makes his second Toronto start in the second game of Saturday's doubleheader. His opponent will be Red Sox RHP Tanner Houck (0-2, 2.45). Houck will start in place of struggling LHP Martin Perez, who was moved to the bullpen Friday.