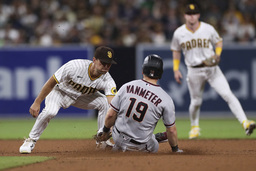 SAN DIEGO (AP) Yu Darvish allowed a two-run homer to Christian Walker in the second inning, and that was all the Arizona Diamondbacks got off the San Diego Padres' ace.

Unfortunately for Darvish, he didn't get the win in a 6-2 victory despite striking out 12 because he was out of the game by the time the Padres scored four runs in the eighth, keyed by Manny Machado's go-ahead single.

Darvish matched his season strikeout high and didn't walk a batter in seven brilliant innings while holding Arizona to two runs and four hits. He left with the score tied at 2. San Diego had two on with one out in the seventh before Tommy Pham grounded into a double play.

Darvish's only big mistake was Walker's homer to left-center, his fifth, for a 2-1 lead. Kole Calhoun was aboard on a leadoff walk.

"He did what aces do, he shook it off and almost said like, `That's all you get from here,' and just continued to execute pitches," Padres manager Jayce Tingler said. "That's exactly what you want to see from all your guys, but that's what top-line pitchers do. If they do give up runs early, that's all you get, and that's what he did."

Tingler said Darvish "was 0-2 all night, and it was a mixture of all the pitches. Not only was he pounding the zone, he was sharp, it was late moving, the fastballs had good life, he threw some split-fingered fastballs there, that those were some of the best ones I've seen him throw all this year. He had it all working. He was outstanding tonight, which was well-needed."

Said Darvish: "I'm not too conscious about being the ace and all that. I think this goes for any pitcher - you want to stay in the game as long as possible and keep the team in the game and that's what I'm trying to do."

The Padres broke through in the eighth. Adam Frazier hit a leadoff single against Brett de Geus (2-1) and stole second without a throw. Machado then singled to bring in Frazier. Joe Mantiply walked Trent Grisham with the bases loaded, and pinch-hitter Austin Nola followed with a two-run single.

Drew Pomeranz (1-0) pitched a scoreless eighth for the win.

Machado and Eric Hosmer homered for the Padres, who blew a 5-0 lead in the series opener Friday night and lost 8-5.

Hosmer tied the game in the second with a leadoff shot down the right-field line, his eighth. Machado homered to left with two outs in the first, his 21st.

The Padres loaded the bases against Taylor Widener with no outs in the fourth and failed to score. Victor Caratini popped up to shortstop and Darvish grounded into a double play.

Padres: All-Star SS Fernando Tatis Jr. (partially dislocated left shoulder) shagged fly balls in CF again in preparation for a possible position switch when he comes off the injured list. Tingler said no decision has been made about moving Tatis and that he's been working in CF for "reactions and reads off the bat ... most importantly just keep his legs staying strong and moving around." Tatis, who injured his shoulder on an awkward slide July 30, is eligible to come off the IL on Tuesday but both he and Tingler say he'll likely need more time.

A matchup of left-handers as Madison Bumgarner (6-6, 4.57 ERA) of the Diamondbacks and Blake Snell (4-4, 5.44) of the Padres bring the series to a close Sunday. Bumgarner is 2-1 with a 1.80 ERA in four starts since coming off the injured list July 16. Snell will try to win consecutive starts for the first time this year.