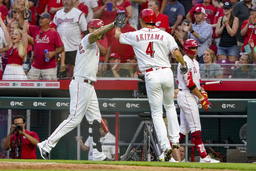 CINCINNATI (AP) Jesse Winker went 3 for 5 with a homer, double and tied a career high with six RBIs to lift the Cincinnati Reds over the Pittsburgh Pirates 11-3 on Saturday night.

"Hitting can be contagious for sure," Reds manager David Bell said. "It's nice because everybody feels like they contribute. We've had a lot of injuries like a lot of teams but everyone has stepped up."

Rookie right-hander Vladimir Gutierrez (7-3) allowed a run over six innings to earn the victory. He retired the final seven batters he faced.

"Gutierrez had four or five pitches working tonight," Bell said. "He seemed to have an extra gear on his fastball at the end. It had a lot of life on it."

Cincinnati continued its dominance of the Pirates, improving to 8-1 this season, including 6-0 at home. Dating to last season, the Reds have won 14 of their past 15 games against Pittsburgh.

The Reds have won 9 of 11 and are averaging more than seven runs per game.

Bryan Reynolds went 3 for 4 with a two-run homer and an RBI triple for Pittsburgh.

Pirates starter Mitch Keller (3-9), who owned a 9.37 ERA in four previous starts against the Reds, allowed four earned runs in five innings to take the loss.

Pittsburgh handed Keller a lead when Ke'Bryan Hayes doubled and scored on Reynolds' triple in the third.

The Reds answered with three runs in the bottom half, including Winker's RBI double. Winker last had six RBIs on June 6 in an 8-7 win over the Cardinals.

"You know what, I was just trying to hit the ball hard," Winker said. "It was just that guys were on base all night. This has been a lot of fun. We've had good at bat after good at bat. Hope we can keep it going."

Castellanos took Keller deep to the opposite field leading off the fifth. It was his 19th home run of the season.

"He didn't get ahead as much as we'd like," Pirates manager Derek Shelton said of Keller's night. "He maintained his stuff. Still need to get on the plate more with the fastball."

Votto hit a solo homer, his 23rd of the season, off Nick Mears to cap a five-run eighth.

"Our lineup can be very dangerous," Castellanos said. "Our goal now is to stay healthy. We're having fun."

With Castellanos and Mike Moustakas back healthy, the Reds' offense is playing well. They have scored at least five runs in 14 of their past 15 games, including 28 combined in the first three games of this four-game series with Pittsburgh.

"They put a good lineup together," Shelton said. "Look at the guys they have off the bench. (Tyler) Naquin has 13 homers. (Eugenio) Suarez has 22. If you don't execute pitches against them, you are going to pay for it. We did tonight."

The Pirates on Saturday selected the contract of outfielder Anthony Alford from Triple-A Indianapolis. Phillip Evans was optioned to Triple-A. Pittsburgh also reinstated Erik Gonzalez from the injured list and designated him for assignment.

Alford started in left field on Saturday and went 3 for 4 with a pair of doubles.

Reds right-hander Lucas Sims is expected to be activated on Sunday. Sims has been on the injured list since June 24 with a right elbow strain. Right-hander Tejay Antone, who's on the IL for the second time this season with a right forearm strain, began a Triple-A rehab assignment on Saturday.

Right-hander Tyler Mahle will start the series finale for the Reds. He is 2-3 with a 3.58 ERA in seven career starts against the Pirates, including a victory on May 10. Right-hander Bryse Wilson will be making his second start for the Pirates since being acquired from the Braves. He has never faced Cincinnati.