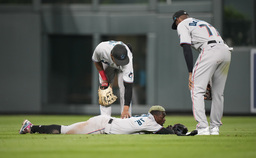 It was the fifth time this season Marquez threw at least six scoreless innings, the fourth time at home.

Miguel Rojas homered off Yency Almonte in the eighth for the Marlins. Miami catcher Sandy Leon pitched the bottom of the inning and was tagged for the Rockies' fifth homer of the night, a two-run drive by McMahon that cleared the wall in straightaway center.

The Rockies sent 13 batters to the plate and had eight hits - three of them homers - in the fourth. The nine runs were their most in an inning since they scored 13 in the fifth at San Francisco on May 5, 2016. "When guys get rolling like this, we kind of feed off each other," Cron said. "It's not like a one-up thing, but it's just like, `He just hit that homer. That ball was touched. So it's something I want to do, too.' We're taking a lot more aggressive swings in the zone, and I think it's starting to show. It's nice that some of these balls are going out. We had a lot tonight and it was fun to watch."

Cron homered off Sandy Alcantara (6-10) leading off the second for the Rockies' first run and he was hit by a pitch to start the big inning. Sam Hilliard doubled to drive in Cron, triggering the cascade of runs that included an RBI groundout by Tapia and a run-scoring single by Rodgers followed by a two-run homer from Blackmon.

Trevor Story doubled and McMahon walked ahead of Cron's second homer of the night, finishing Alcantara. Steven Okert relieved and Diaz greeted him by connecting for his 13th home run of the season.

"It was a tough, tough night for Sandy, obviously," bench coach and acting Marlins manager James Rowson said. "I still believe in him. We all do. We're getting ready for him to get to that next start. The key is to get past this one and get to the next one. But, he just didn't command the ball as well as he normally does and it was a little bit tougher out here today for him."

Story, playing on the left side of second base as part of a shift, made a diving stop of Isan Diaz's sharply hit grounder leading off the fifth. Unable to snap back to his feet and throw to first in time to get the runner, Story instead shoveled the ball with a flip of his glove as he lay on the ground to second baseman Rodgers standing nearby. Rodgers relayed the ball to Cron at first in time to get the hustling Diaz by a step.

"That was a pretty special play," Rockies manager Bud Black said. "I told them we're going to see that play for a while on highlight reels across the country, every ballpark we go to. That play will be shown as a true highlight-reel play."

Marlins: RHP Pablo Lopez, sidelined since July 14 with a right rotator cuff strain, is scheduled to throw a 20-pitch bullpen Saturday. . INF Jon Berti, placed on the injured list July 23 with a concussion, is stepping up physical activity and appears to be progressing well in his rehab work.

Marlins: LHP Jesus Luzardo (3-4, 6.70 ERA) is set to make his second start since being acquired by Miami in the July 28 deal that sent Starling Marte to Oakland. Luzardo won his Miami debut, beating the New York Mets on Monday.

Rockies: LHP Austin Gomber (8-5, 3.69) has gone 6-1 with 2.08 ERA in his last 10 starts, despite enduring a stretch on the 10-day injured list (left forearm tightness) during that span. He's slated to make his third start since being reinstated from the IL.