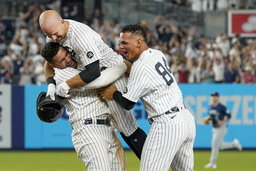 Aaron Judge hit a tying sacrifice fly in the eighth and Giancarlo Stanton pulled the Yankees even again with a two-out single in the 10th. New York (60-49) has won seven of eight since the trade deadline to move a season-high 11 games over .500.

"You have to give them credit. It's tough to beat them here in this ballpark and close them out," Seattle manager Scott Servais said. "When you're down to your final out like that, it's a tough one to swallow."

Relegated to a bullpen game after two starters tested positive for COVID-19 this week, the Yankees used nine pitchers - the most in franchise history for a game not played in September.

None of those pitchers went more than 1 2/3 innings, making New York the first major league team since 1900 to win in extra innings without having a pitcher throw at least two innings.

"It's cool to see," Stanton said. "You've got guys coming out in maybe uncomfortable settings for them and they came in and shoved."

With one out in the 11th, the Mariners intentionally walked Rougned Odor for the second time in three innings to face light-hitting catcher Kyle Higashioka. Keynan Middleton (0-2) struck out Higashioka before Gardner, who turns 38 this month, lined a 2-2 fastball into center field to score automatic runner Joey Gallo from second base.

"It definitely felt good to be able to come through," Gardner said. "I feel every game now kind of has that must-win atmosphere."

It was the ninth career walk-off hit for Gardner, the longest-tenured Yankees player, and his first since July 2017.

"It's been a little while," he said. "Obviously, moments like this is what it's all about."

Hitting just .199 this season, Gardner was mobbed by teammates on the dirt between first and second after ending a game that took 4 hours, 16 minutes.

"He's going to be so important for us moving forward," manager Aaron Boone said. "Needless to say, he's so revered and respected in there so I think that even makes this one a little extra special."

Prior to the Yankees' eighth walk-off win of the year, the clubs traded runs an inning earlier.

J.P. Crawford put Seattle ahead 2-1 with an RBI single off Chad Green in the top of the 10th. Stanton tied it in the bottom half when he fisted a soft single to right-center off reliever Erik Swanson to score Gardner.

Jordan Montgomery had been expected to start for New York before testing positive for COVID-19 earlier in the week.

Reinstated from the COVID-19 injured list himself on Thursday, opener Wandy Peralta allowed a pair of singles in 1 2/3 innings.

A string of Yankees relievers held Seattle scoreless until Abraham Toro singled against Lucas Luetge, scoring Mitch Haniger with two outs in the sixth. The run was charged to Clay Holmes, who was lifted after Haniger singled. Stephen Ridings, Joely Rodriguez and Holmes had retired 11 of 12 before that hit.

Toro is batting .432 (16 for 37) with the Mariners since being acquired in a trade with Houston on July 27, a span that includes five multi-hit games.

After a masterful performance by starter Marco Gonzales, the Mariners' bullpen failed to preserve a slim lead.

Diego Castillo issued back-to-back walks to the pinch-hitting Gardner and then DJ LeMahieu to start the eighth, prompting many in the season-high crowd of 43,180 to rise to their feet. Castillo hit Anthony Rizzo with a pitch, loading the bases for Judge, who tied the score at 1 with a sacrifice fly. Castillo coerced a double play from Stanton to prevent further damage.

"The Yankees are going really well right now. They've got a ton of momentum going," Servais said. "The fans in the ballpark certainly play into that."

Gonzales never reached 91 mph on any of his 108 pitches. The left-hander allowed just three hits and two walks in 6 2/3 shutout innings, striking out five.

"I honestly thought it was hard-fought on both sides," Gonzales said. "This is the type of crowd you want to pitch in front of, for sure."

Seattle reliever Drew Steckenrider got Higashioka and Gardner to pop out with two runners aboard in the ninth.

Peralta made his first big league start after 242 relief appearances.

New York is 18-8 since July 6, the best record in the majors during that span.

Mariners: LHP Justus Sheffield (strained left forearm) should be ready to rejoin the club soon, general manager Jerry Dipoto told ROOT Sports. He also said CF Kyle Lewis (torn right meniscus) is doing baseball activities but no return date is set, and RHP Justin Dunn (right shoulder inflammation) could be back with Seattle by the end of the month.

Yankees: RHP Clarke Schmidt (strained right elbow) allowed a run in 2 2/3 innings Thursday for Double-A Somerset. He will likely make another rehab start in five days, according to Boone. . LF Miguel Andujar (strained left wrist) is still doing "tee and toss" batting practice and feeling good, Boone said. . 1B Luke Voit (left knee inflammation) played nine innings at first base for Triple-A Scranton/Wilkes-Barre, going 2 for 5 with a tying single in the ninth inning before he was lifted for a pinch-runner.

Mariners: RHP Chris Flexen (10-5, 3.75 ERA) pitches Saturday afternoon, with Seattle hoping to improve to 15-6 in his starts this year. The 27-year-old spent the 2020 season in the Korean Baseball Organization.