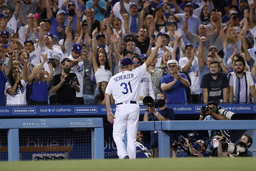 LOS ANGELES (AP) Max Scherzer has accomplished many things during his 14-year major league career, but it wasn't until his first start for the Los Angeles Dodgers on Wednesday night that he got to enjoy this particular experience:

After Scherzer struck out Chas McCormick to end the Houston seventh, the 52,724 fans at Dodger Stadium gave the right-hander a standing ovation. Scherzer tipped his cap as he went into the dugout but came back out after Clayton Kershaw told him to go salute the fans again.

The curtain call capped a successful debut for Scherzer, who struck out 10 in a 7-5 victory over the Astros. The Dodgers provided Scherzer with plenty of offensive support with four home runs to get a split and cap a contentious two-game series.

"That was a cool moment and something I will never forget," Scherzer said. "The fans tonight were great. When it is going nuts you can feed off it."

Scherzer (9-4) tied a season high with 109 pitches, allowing two runs and five hits with a walk.

The Dodger faithful roared with delight as Scherzer, acquired in a blockbuster trade with Washington last Friday, struck out Jose Altuve three times. The three-time Cy Young Award winner also got Carlos Correa to chase a slider for the first out of the sixth inning.

The large crowd was boisterous again. The series marked the first chance for Dodgers fans to unload on the Astros in person since their sign-stealing scandal was revealed late in 2019. Houston beat LA in the 2017 World Series, winning Game 7 at Dodger Stadium.

Los Angeles manager Dave Roberts thought the opponent was a good one for Scherzer's debut.

"The stage isn't too big for him. I just expected him to go out and pitch well," Roberts said. "You can see the elation from the dugout and the finality in the seventh inning. It is what everyone wanted for tonight and I'm happy it played out as such."

Scherzer, Joe Kelly and Kenley Jansen combined for 15 strikeouts. Jansen allowed a two-run homer to Kyle Tucker in the ninth but fanned pinch-hitter Jake Meyers to end the game.

Scherzer threw 73 strikes and said his best pitch of the night was his curveball, which is usually his least effective.

"That was a high-adrenaline start. The offense went off, which allowed me to attack the hitters and remain aggressive in the strike zone," said Scherzer, who is 5-0 in his last nine starts. "When I can pitch with the curveball like that, it allows me to play up the other pitches more."

Michael Brantley, Correa and Tucker connected for Houston. It was the third game at Dodger Stadium since July 10 with seven or more home runs.

"They jumped us early. When Scherzer gets a lead like that he can relax and throw any pitch at any time. His command is pretty good," Astros manager Dusty Baker said.

After Altuve struck out in the first, Brantley sent a 1-1 fastball deep to right for his seventh homer. It was the 19th allowed by Scherzer this season and fourth that came in the first inning.

Correa followed with a single before Scherzer retired the next nine Houston hitters.

The Dodgers were held to five hits in Tuesday night's 3-0 loss but broke through early against Odorizzi with four runs in the first. Betts connected on a slider and put it over the wall in center to tie it at 1.

Max Muncy drew a walk and advanced to second with one out when Altuve's throw on Corey Seager's grounder pulled Correa off the bag at second for an error. With runners on first and second, Smith made the Astros pay for the mistake with a three-run homer to right-center.

Betts' solo shot to left in the second gave him his first multi-homer game of the season. In the third inning, Pollock extended his hitting streak to a career-high 13 games with a two-run drive into the Dodgers' bullpen in left field to make it 7-1.

Odorizzi - who allowed four homers in a game for the second time in his 10-year career - went only three innings and allowed a season-high seven runs (six earned) on six hits and two walks.

"Since the All-Star break my mechanics have been (poor). My fastball has been flat," Odorizzi said. "There are a lot of things I am working on between outings, but then I am reverting back to bad form."

Houston's other runs came on Tucker's RBI single in the fourth and a solo homer by Correa in the eighth.

Astros: 1B Yuli Gurriel was out of the lineup for the second straight day due to neck stiffness. ... 3B Alex Bregman (left quad strain) is expected to need at least a couple more rehab games at Triple-A Sugar Land before being activated.

Dodgers: RHP Jimmy Nelson was placed on the 10-day injured list for the third time this season with right elbow inflammation. LHP Darien Nunez was recalled from Triple-A Oklahoma City to fill the spot.

Astros: Begin a six-game homestand Thursday against Minnesota with LHP Framber Valdez (7-2, 3.01 ERA) on the mound. Valdez has won his last two starts and will be opposed by RHP Griffin Jax (1-1, 6.41).

Dodgers: Have an off day Thursday before facing the Angels on Friday in the second half of this season's Freeway Series. LHP David Price (4-1, 3.55 ERA) gets the call against LHP Patrick Sandoval (3-5, 3.38).