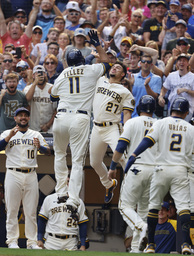 Tellez connected on a three-run homer as a pinch-hitter to put the Milwaukee Brewers ahead for good in the seventh inning of a 4-2 victory over the Pittsburgh Pirates on Wednesday afternoon.

"I think the hardest thing to do is remaining composed when you're pinch-hitting, especially in a big situation like that," Tellez said.

A fan base that has warmed up to Tellez ever since he came over from Toronto in a July 6 trade chanted his first name before and after his homer.

He says he has benefited from getting more regular playing time since the trade.

"Coming here has just been kind of a blessing," Tellez said. "I've always wanted to be somewhere, everybody wants to be somewhere they can hear their name chanted and be wanted. It's just great. The fans are awesome here. They're loyal. I couldn't ask for a better environment to be in."

The Brewers' go-ahead rally started with two outs and none on.

Luis Urias fell behind 0-2 in the count but ended up walking when he took a 3-2 pitch that was just low from Kyle Keller (0-1). Manny Pina followed by hitting a ground-ball single that went off the glove of diving third baseman Ke'Bryan Hayes.

Pirates manager Derek Shelton then summoned left-hander Chasen Shreve from the bullpen to face the left-handed Tellez. Left-handed hitters had been hitting just .137 and slugging .176 against Shreve this season.

After falling behind 0-2, Tellez worked the count to 2-2 and then delivered a shot that traveled an estimated 423 feet and reached the second deck of the stands in right center.

"We go 0-2 to Urias and we walk him so we extend that inning, and then we give up the hit to Pina, so the 0-2 walk there I think is something that stands out," Shelton said. "And with Shrever, just too many balls in the middle of the plate."

"He was aggressive on the first pitch, got behind 0-2 and then he fouled off some pitches, took some pitches down and finally he got one he could hit," Counsell said. "Just a great at-bat."

Devin Williams worked around a leadoff walk in the ninth to earn his first career save.

Pittsburgh's Bryan Reynolds went 2 of 2, walked twice and scored both of the Pirates' runs. The Pirates were 0 for 9 with runners in scoring position and left nine men on base.

The Brewers won two of three from the Pirates and remain 7 1/2 games ahead of Cincinnati in the NL Central.

Pirates left-hander Steven Brault gave up one run over four innings in his season debut after recovering from a strained lat in his throwing arm. Brault gave up three hits, struck out two and walked one.

"It felt like kind of being back home," said Brault, who has faced the Brewers more than any other opponent. "I say that one, because I love pitching in the big leagues and two, because I feel like I've pitched in Milwaukee every other start my entire career."

Pirates: Director of sports medicine Todd Tomczyk said RHP Trevor Cahill has multiple fractures in his left foot and will be re-examined next week. Tomczyk called it an injury that sidelines a player for eight to 12 weeks.

Brewers: RHP John Axford is out for the season after leaving Monday's game with an elbow injury, and LHP Eric Lauer has gone on the COVID-19 injured list. OF Christian Yelich could return from the COVID list in time to play in this weekend's series with the NL West-leading San Francisco Giants.

Brewers: Off Thursday before starting a three-game home series with the Giants on Friday. RHP Corbin Burnes (6-4 2.46) will pitch for the Brewers on Friday.