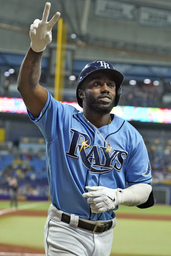 ST. PETERSBURG, Fla. (AP) Yandy Diaz, Mike Zunino and Randy Arozarena homered and the Tampa Bay Rays moved within a half-game of AL East-leading Boston with a 7-3 victory over the Red Sox in the opener of a three-game series on Friday night.

Boston has had at least a share of first-place in the division since June 28. The Red Sox or Rays have been in the top spot since April 10.

Diaz connected on a two-run drive in the first. After Wander Franco hit a two-run double in the third inning, Tampa Bay went up 6-2 in the fourth when Zunino and Arozarena had solo shots off Martin Perez (7-7).

"He wasn't able to keep the ball in the ballpark," Boston manager Alex Cora said. "That's what they do. They work counts, work a walk here and there, but hit the ball out of the ballpark."

Christian Vazquez and Bobby Dalbec had RBI singles off Fleming (8-5) in the fourth. Vazquez was thrown out trying to advance to second on his one-out hit, which impacted the inning when the next three batters, including Dalbec, reached base safely.

"We felt we were in the ballgame," Cora said. "I think offensively it was a weird night, right? A lot of hits, a lot of walks, a lot of deep counts. Felt like we were one swing away from getting back."

Kike Hernandez slammed his bat to the ground when he popped out with the bases loaded to end the fourth.

"I thought I did a good job once they got the bases loaded," Fleming said, "Really just settled down and made two good pitches that got me out of it."

Tampa Bay took a 7-3 lead in the fifth when Franco tripled and scored on a wild pitch by Yacksel Rios.

"It's like playing in the World Series, you can never let up on them," Diaz said through an interpreter. "You've got to be able go out there and focus right from the get-go."

The Rays designated RHP Jake Reed for assignment, just days after his wife Janie Reed was part of the U.S. Olympic softball team that lost the gold medal game to Japan.

Jake Reed was claimed off waivers from the Los Angeles Dodgers last Sunday and optioned to Triple-A Durham.

YOU HAVE TO BE KIDDING

For the second consecutive game, a foul ball hit just behind the plate got stuck on an overhead structure at Tropicana Field,

Hunter Renfroe did it in the second off Fleming.

Arozarena had his foul against New York Yankees ace Gerrit Cole disappear above the playing field on Thursday.

Rays: DH Nelson Cruz (bruised right foot) started after being out of the lineup the previous two days and went 2 for 5. . RHP Nick Anderson (right elbow sprain) was scheduled to join Triple-A Durham, but didn't because of COVID-19 related issues. . RHP Collin McHugh (right arm fatigue) had a bullpen session.