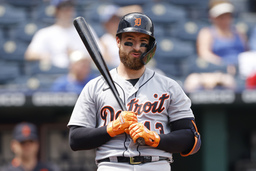 By BY CODY FRIESEN

The Royals grabbed a 4-0 first-inning lead as Perez hit his team-leading 23rd home run and Soler followed with his 11th for the Royals, who have won fifth straight games.

It was the second straight game Perez has hit a three-run homer.

Soler hit his second home run of the day in the third inning, his fourth blast in five games.

Jarrod Dyson collected an RBI single in the seventh. The Royals finished the afternoon with eight hits and only two left on base in sweeping the three-game series.

"You don't pitch eight major league innings without having confidence in your stuff," Royals manager Mike Matheny said. "For him to step in against a team that has been swinging the bat really well, I am just impressed with him."

After being recalled from Triple-A Omaha on Sunday morning, Lynch (1-2) gave up five hits and struck out four. He was the first Kansas City starter this season to toss eight innings.

"I just told myself to just go out and make pitches." Lynch said. "Cam Gallagher caught a great game and my team played great defense."

Eric Haas tacked on the lone run for the Tigers off of Ervin Santana in the ninth. Jake Brentz came on and closed the door on Detroit.

"They were aggressive on Skubal's fastball early," Tigers manager A.J. Hinch said. "They did a lot of damage with it."

The longball has punished Skubal all season. He had allowed 19 entering the game.

Matt Manning (2-3, 5.79 ERA) will open a three-game series in Minnesota for the Tigers on Monday.

Kansas City begins a four-game series against Chicago Monday. Mike Minor (7-8, 5.45) will take the mound for the Royals.