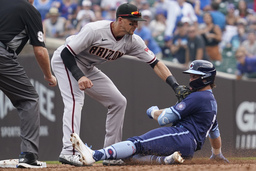 Big changes could be in store for the Cubs with the trade deadline a week away. If this is their final homestand together, it's off to quite a start.

"I think this is a professional team," Davies said. "Everybody's gonna go out there and try and win, regardless of what's going on with the team. Enjoying winning baseball, enjoying successful baseball and playing well, that's where everybody's mind's at."

Baez gave the Cubs a 3-0 lead in the first inning with his long three-run homer to left. The Cubs added three more in the third, capped by Nico Hoerner's two-run single.

Chirinos made it 7-0 leading off the fourth against Zac Gallen (1-5). He also homered to start the sixth against Matt Peacock after Arizona scored two in the top half, helping Chicago win for just the sixth time in 23 games since Davies and three relievers no-hit the Dodgers in Los Angeles on June 24.

In between, the Cubs fell from a first-place tie with Milwaukee in the NL Central to nine games back of the Brewers at 47-50 entering this one. Davies (6-6) threw 107 pitches in 5 1/3 innings, allowing two runs and seven hits. The 28-year-old right-hander struck out a season-high eight while walking two, and came away with the win after going 0-2 in his previous four starts.

Davies exited leading 7-0 with runners on second and third before Daulton Varsho greeted Adam Morgan with a two-run double.

Rookie Keegan Thompson worked the final three innings for his first career save.

"The homer by Javy is big, three runs early on, getting back home, get the crowd into it" manager David Ross said. "It's nice to be back home. Zach settled in there as the game went on, nice job there. ... A lot of guys had some really nice days."

Varsho homered in the ninth. But the Diamondbacks, owners of baseball's worst record, came up short after matching a season high with four straight wins.

Gallen tied a career high by allowing seven runs and matched a season worst with six hits in four innings. The 25-year-old right-hander is 0-5 in eight starts since beating Atlanta on April 25.

"Not good," he said. "Didn't have good stuff. Didn't make pitches when I needed to. Didn't keep us in the game and had to go to the bullpen too early. All around, negative."

Diamondbacks: Were trying to determine the severity of INF/OF Josh Rojas' dislocated left pinkie, though manager Torey Lovullo does not think surgery will be necessary. Rojas was hurt on a failed steal attempt in Wednesday's win over Pittsburgh at home and was not in Chicago. He had not been placed on the injured list. Lovullo said the Diamondbacks were still "gathering information" and expected to have an answer "in the next 12 hours."

Cubs: LF Kris Bryant (right hamstring fatigue) was back in the lineup after being held out the previous two games. ... The Cubs placed LHP Brad Wieck on the 60-day injured list because of an irregular heartbeat. They also claimed OF Johneshwy Fargas off waivers from the New York Mets and optioned him to Triple-A Iowa. INF Eric Sogard was designated for assignment. Wieck will undergo his second cardiac ablation in as many years to fix an irregular heartbeat. The date for the procedure was not set. He had a similar operation in February 2020. ... The Cubs activated 3B Matt Duffy (low back strain) from the 60-day injured list.

RHP Merrill Kelly (6-7, 4.46 ERA) looks to stay on a roll for the Diamondbacks, while RHP Alec Mills pitches for the Cubs. Kelly is 4-0 in his past six starts, including a win over the Cubs last week.