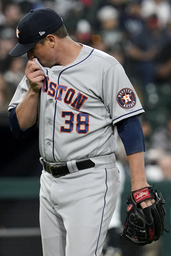 CHICAGO (AP) Lucas Giolito said he wanted to "come out with a vengeance" in his first start after the All-Star break.

Giolito pitched a three-hitter, Jose Abreu launched a three-run homer and the White Sox beat the Astros 10-1 on Saturday night.

Tim Anderson, Zack Collins and rookies Gavin Sheets and Jake Burger also went deep as the White Sox broke out against the Astros after dropping the first five games in the season series by a combined 34-9 score.

"I didn't really like my first half," Giolito said. "Today was really a good launching point for flipping the switch.

"I thought I was convicted behind each and every pitch tonight, even the ones that didn't go my way."

Giolito (8-6) struck out eight and walked none while throwing 107 pitches in his fifth career complete game. After Michael Brantley doubled with one out in the first, Giolito retired 22 in a row before Abraham Toro homered with two outs in the eighth.

None of Houston's first 16 outs against Giolito came on grounders. All were on fly balls, popups or strikeouts until Jose Altuve chopped the ball to third baseman Yoan Moncada for the final out of the Houston sixth.

"Lucas, he was nasty, man," manager Tony La Russa said. "I think from the first pitch his stuff was electric."

Anderson had three hits in the matchup of AL division leaders, and Burger's seventh-inning solo shot was his first career homer.

And the White Sox wanted to make a statement after the Astros had manhandled them through their first five meetings.

"We definitely needed that one," Anderson said. "For us to go out and put up 10, hopefully we started something up."

Astros right-hander Jake Odorizzi (3-5) permitted four runs and six hits in 3 1/3 innings. He entered with a 1.04 ERA is his previous five outings, but was out of kilter in one.

"I just couldn't find a consistent slot today," Odorizzi said. "Not establishing fastball command was really the reason today. Just one of those days."

Collins and Anderson went deep on consecutive pitches from Odorizzi with one out in the third. Both homers may have been boosted from a steady breeze that was blowing out, but Odorizzi made mistakes on both pitches.

"He really got hurt on the first couple of homers," manager Dusty Baker said. "They were up over the plate and they didn't miss them.

"I guess it was their night. We had beaten them five in a row."

Sheets made it 6-0 with a two-run drive off Brandon Bielak in the fifth, and Abreu's 16th homer was a three-run shot to left against Joe Smith in the sixth.

Abreu's homer was No. 214 for his career, moving him into a tie for fourth place with Carlton Fisk on the franchise list.

STAYING ON THE SOUTH SIDE

The White Sox and All-Star right-hander Lance Lynn agreed to a $38 million, two-year contract extension. The 34-year-old Lynn is 9-3 with an AL-best 1.99 ERA in 16 starts in his first season with Chicago.

"There's no point in going into free agency if you know where you want to be," Lynn said. "They've put together a winner here. That's what I want to be part of and help to kind of push it over the top to get a championship."

Giolito said he and he wife took a trip to Lake Tahoe to get away from baseball during the All-Star break. Then the couple hung out with their pets and Giolito said he "came back here ready to go."

"He was getting the ball and he was rushing us," Baker said. "He had his tempo up and his timing together."

White Sox: Manager Tony La Russa said RHP Evan Marshall (strained right elbow) has resumed throwing the ball, but not off the mound or in the bullpen. There's no timetable for his return.