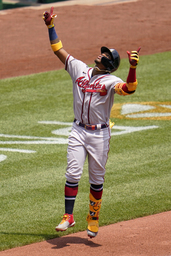 Freddie Freeman homered and Austin Riley doubled and tripled for the Braves. Ozzie Albies and Dansby Swanson each had two hits and an RBI.

The 37-year-old Morton (8-3) struck out seven and walked two. Morton allowed one Miami runner to reach third base, but Joe Panik was stranded after Jazz Chisholm Jr. flew out to center field and ended the third inning.

"That was awesome, that was really, really good," Atlanta manager Brian Snitker said of Morton's outing. "He could have kept going. His stuff was really good, too. Everything was really crisp tonight."

In his previous start Sunday, Morton allowed four runs and five hits in 5 1/3 innings against Miami.

"Getting through the sixth and seventh pretty efficiently was a pretty big deal," Morton said. "I really seemed to see the difference between this outing and the last one."

Miami reliever Anthony Bender hit Acuna with a slider in the seventh. A frustrated Acuna stared and walked toward Bender before he was held back by Marlins catcher Jorge Alfaro and home plate umpire Jordan Baker. Acuna headed to first base, slamming his protective elbow gear to the ground.

"Not a big deal," Snitker said. "He hit him with a breaking ball. Everybody handled themselves fine."

Marlins pitchers have hit Acuna seven times since the three-time All-Star's rookie season in 2018, including with the first pitch of Atlanta's first at-bat of their game July 2. That hit-by-pitch resulted in the ejection of Miami starter Pablo Lopez.

"I've really grown tired of the drama, honestly," Miami manager Don Mattingly said. "I'm sure anybody that's ever played the game talked about it saw that wasn't intentional. I'm tired about it, tired of talking about it."

Pinch-hitter Orlando Arcia extended the Braves' advantage with his RBI double in the eighth and Swanson singled Riley home in the ninth.

Freeman gave Atlanta a quick lead with his solo homer against Miami starter Anthony Bass in the first. The Marlins were forced into a bullpen game after scheduled starter Zach Thompson fell ill and became a late scratch.

One of Miami's late-inning relievers, Bass (1-5) had not started a game since Oct. 2, 2012. Bass was lifted after the first, allowing the home run to Freeman and striking out two.

Shawn Morimando relieved Bass and held Atlanta scoreless the next five innings. Recalled from Triple-A Jacksonville on Friday, Morimando had one previous relief appearance with Miami this season, when he entered the ninth to close a 9-2 lead against Philadelphia May 24 but allowed four runs and four hits and lasted 2/3 of an inning.

"I was super excited to get another opportunity, to get back here, to compete," Morimando said. "I've been working hard in Jacksonville to be stay more consistent with all my pitches."

Friday's win keeps the Braves (43-44) in line to go into the All Star break with a winning record. Atlanta has not had a losing record at the break since 2017.

"Going into the break, trying to finish strong," Riley said. "It's been a grind for sure. Things are starting to fall our way."

SURFSIDE IN THEIR HEARTS

Before Friday's game, Mattingly and shortstop Miguel Rojas visited a memorial for the Surfside apartment complx that collapsed June 24. As of Friday, there are 79 confirmed deaths with 61 people still unaccounted. The coastal town of Surfside is located 13 miles from the Marlins home stadium.