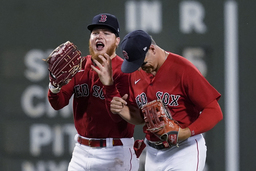 BOSTON (AP) When Red Sox manager Alex Cora made Kike Hernandez his leadoff hitter, he had one goal in mind: "Instant offense."

"That's what we're looking for: For him to hunt fastballs and do damage," Cora said on Friday night after Hernandez led off Boston's first with a home run and sparked the Red Sox to an 11-5 victory over the Philadelphia Phillies. "That's what he's been doing the last two homestands."

Hernandez' homer was his fifth from the leadoff spot this season; only Kyle Schwarber (7) and Jose Altuve (6) have more. It was also his fifth homer in his last 12 games - four of them in the first inning.

"He's a tone-setter at the top of the lineup," Red Sox starter Garrett Richards said. "And the rest of the lineup isn't any easier. The boys are rolling right now."

J.D. Martinez added a three-run shot in the second inning, his 18th of the season, and Rafael Devers hit his 22nd in the four-run fourth as the Red Sox bounced back from 1-0 and 3-2 deficits to pull away.

Richards (5-5) pitched five innings for his first victory in nine starts since May 19, allowing three runs on seven hits and a walk while striking out four. Returning home from a six-game California swing, Boston won its ninth straight at Fenway Park - its longest home winning streak in 10 years.

"For us to get to where we want to go, we have to make this place a home-field advantage again," said Cora, whose team improved to 28-17 at home. "We have to play good here. We've been doing that."

Vince Velasquez (3-4) lasted just 2 1/3 innings for the Phillies, his shortest start of the year. He allowed eight runs on six hits and four walks, striking out two but allowing three home runs.

"When he did throw strikes, he threw a lot of them over the middle," Phillies manager Joe Girardi said. "And that's a dangerous spot to a team that swings the bat extremely well."

Martinez had two hits and a walk, driving in four runs. Devers walked twice and had his 72nd RBI - second in the majors to Vladimir Guerrero Jr. Xander Bogaerts, Boston's other All-Star position player, singled and scored but also struck out three times. (Pitchers Matt Barnes and Nathan Eovaldi also made the AL team; the five Boston players is the most in baseball.)

Philadelphia catcher J.T. Realmuto doubled in a run in the first inning and added a single in the fifth. Pitcher Zack Wheeler was also named to the NL squad for Tuesday's game in Denver.

The Red Sox had gone five straight games without an error, one short of their longest string of the season, before committing two in the second inning on Friday night. Hernandez misplayed Didi Gregorius' single in center for an extra base, and Richards threw away a pickoff attempt.

Infielder Ronald Torreyes pitched the eighth for Philadelphia, retiring the Red Sox in order on just five pitches - all strikes.

Phillies: Reliever Jose Alvarado took a line drive from Alex Verdugo off his heel in the seventh inning. He pounced on the ball, but his throw to first was not in time. He was checked out by the trainer but remained in the game.