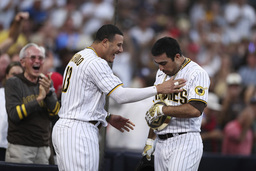 But it was Camarena's blow that really jolted the crowd at Petco Park.

Camarena, who went to Cathedral Catholic High, was called up earlier in the day for his second stint with the Padres. He replaced Yu Darvish starting the fourth inning after the All-Star's left hip tightened up, and allowed Trea Turner's second homer of the game, a two-run drive that gave the Nationals an 8-0 lead.

With the Padres' bullpen taxed in recent days, manager Jayce Tingler had Camarena bat for himself against the struggling Scherzer with the bases loaded and two outs in the fourth. The left-hander golfed a 1-2 fastball deep into the right-field stands to send the fans into a frenzy and pull the Padres to 8-6.

He was as stunned as everyone else in the ballpark

"Oh my God, I blacked out," he said. "I hit first base and then all of a sudden I noticed the lights were flashing in the stadium and that's when it kind of hit, like, Oh my God I just hit a home run. Not only that, a grand slam."

Camarena had struck out in his only previous big league at-bat during his debut earlier this season. In the minors, he was 5 for 28 (.179) with no extra-base hits and zero RBIs. Triple-A teammate Gosuke Katoh, who's also from San Diego, had given him a bat and batting gloves.

Camarena became the second pitcher in history whose first hit was a grand slam. The first was Bill Duggleby of the Philadelphia Phillies on April 21, 1898.

The 28-year-old Camarena was the first relief pitcher to hit a grand slam since Pittsburgh's Don Robinson on Sept. 12, 1985, and was the first Padres player, pitcher or position player, to have a grand slam for his first hit. The last player in the majors to do that was San Francisco's Brandon Crawford on May 27, 2011, at Milwaukee.

"I think more than anything, everybody was in shock," Grisham said of the slam. "Shock and excitement. We had four runs on the board and we were back in it."

It was the first home run Scherzer allowed to a pitcher in a 14-year career that includes three Cy Young Awards and seven All-Star selections. It was the fourth time he's given up a grand slam - Vladimir Guerrero Jr. of Toronto also hit a slam off him this year.

Tommy Pham started the Padres ninth with a leadoff single against Sam Clay (0-2), advanced on consecutive groundouts and scored when Grisham singled to right.

The Nationals chased Darvish after three innings and gave Scherzer an 8-0 lead after four before the 36-year-old right-hander allowed seven runs in the fourth.

Pham singled to chase Scherzer and Tatis hit a bloop RBI single off Kyle Finnegan to pull within 8-7.

Tatis opened the fourth with a drive into the second deck in left field. With one out, Scherzer hit Manny Machado with a pitch, allowed a single to Grisham and hit Eric Hosmer with a pitch to load the bases. Wil Myers worked a walk to bring in a run before Scherzer struck out Victor Caratini. Camarena then connected.

The Padres have five grand slams this season. Their 12 slams since the start of the 2020 season are the most of any team in baseball. The Padres popularized "Slam Diego" last year when they became the first team in history to have four slams in as many games and five in six games.

"Down 8-0 to Max Scherzer, our ace goes out of the game, we get a grand slam from a pitcher just called up today, probably at the top," Tingler said. "It's special and that's why I'm confident we're going to do special things, just because of the way we fight. We don't lay down, we just keep going."

The Padres tied it at 8 on Pham's two-out double in the sixth.

Turner homered in the first and singled in the third, and scored twice against Darvish.

All-Star Mark Melancon (2-1) pitched the ninth for the win.

Scherzer allowed seven runs and five hits in 3 2/3 innings, struck out seven and walked one.

Darvish allowed six runs and eight hits in three innings, struck out two and walked none.

Padres: Caratini, the catcher, was hit by a foul ball on the right hand in the fifth inning. He finished the inning but was then replaced by Webster Rivas.

Nationals: RHP Paolo Espino (2-2, 2.48 ERA) is scheduled to start Friday night in the opener of a three-game series at San Francisco. The Giants will counter with RHP Logan Webb (4-3, 3.86).

Padres: Haven't named a starter for opener of three-game series against Colorado. It normally would be LHP Blake Snell's turn but Tingler said Snell is still trying to regain strength after a recent bout of food poisoning.