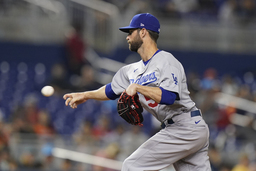 MIAMI (AP) Automatic runner Starling Marte advanced to third on Blake Treinen's wild pitch and continued home when catcher Will Smith threw wildly past third base for a game-ending error in the 10th inning, giving the Miami Marlins a 2-1 win over the Los Angeles Dodgers on Tuesday night.

Miami went 1 for 14 with runners in scoring position but got a pair of unearned runs as the Dodgers made two of the game's four errors.

Treinen (2-4) got two outs before bouncing an 0-1 slider that bounced away from Smith to the edge of the dirt circle on the first-base side of the plate, Smith's throw bounced off the glove of third baseman Justin Turner to the low wall behind third base as Marte slid into third headfirst.

Marte, who started the inning on base under pandemic rules, got up and sprinted home as left fielder Zach McKinstry's rushed throw home sailed over Smith as Marte slid in feetfirst.

"I was surprised that Star hadn't taken off earlier," Miami manager Don Mattingly said. "I thought he would try to run one of those first two hitters early in the count. Then that one bounces away, and it was over. That was a crazy ending."

Smith's error was the fourth by the Dodgers in two days.

"When I got to it, I saw Marte halfway," Smith said. "I make a good throw he's out. In hindsight I probably shouldn't have thrown it."

David Hess (2-0) pitched a one-hit 10th for his second consecutive win of the series.

"We got our outs, got the zeroes we needed," Mattingly said. "We're still running guys hard. I think the guys understand where we're at. You're looking at that 10th inning hoping to get it done there."

Right-hander Jake Reed was called up by the Dodgers, and the 28-year-old made his major league debut as his wife Janie Reed prepares to play outfield for the U.S. softball team at the Olympics.

Reed entered in the sixth inning with a 1-0 lead, and the Marlins tied the score when Marte reached on an infield single, stole second and shortstop Gavin Lux committed an error on Jesus Aguilar's two-out grounder. The side-arming reliever allowed two hits, struck out one and walked one.

"We did a great job of preventing runs," Roberts said. "The bullpen did a really nice job of keeping us in the ballgame. The offensive side we had opportunities but just couldn't cash in."

Smith hit an RBI single in the fourth after Cody Bellinger led off with a single that culminated a 12-pitch at bat. Right-fielder Garrett Cooper overran the sinking line drive, allowing Bellinger to reach third on the two-base error.

Miami's Pablo Lopez, whose previous start lasted one pitch after he was ejected for hitting Atlanta's Ronald Acuna Jr., needed 91 pitches to get through four innings He allowed four hits, struck out eight, walked one and hit a batter.

"They were laying off good pitches that you're hoping to get a swing, hoping to get weak contact," Lopez said. It makes you think that they are on you. You really can't take any pitch for granted. It becomes a constant battle."

Former Dodger outfielder Reggie Smith has been selected to the NL All-Star coaching staff. Smith, a seven-time All-Star during his 17-year career, played six seasons with the Dodgers.

"For me, it kind of hit me one day where I really felt I wanted to be part of the festivities that the baseball world needed to hear Reggie's story again," said Roberts, who will guide the NL All-Stars. "When I told him, it was really emotional. I am so honored and blessed that I could do this for him."

The Dodgers designated OF Steven Souza Jr. for assignment.

Both teams were likely to go with bullpen games Wednesday.