DeGrom likely loses start before break as Mets rained out 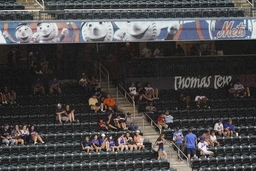 NEW YORK (AP) Mets ace Jacob deGrom likely lost one of his last two starts planned heading into the All-Star break when Tuesday night's game against the Milwaukee Brewers was rained out.

The game was called after a wait of nearly 2 1/2 hours and rescheduled as part of a day-night doubleheader Wednesday at 2:10 p.m. and 7:10 p.m. Each game will be scheduled for seven innings under pandemic rules.

DeGrom, 7-2 with a record-low 0.95 ERA, had been scheduled to start against left-hander Brett Anderson (2-5, 4.69). New York had planned to have deGrom start the final game before the break on Sunday but is not likely to use him on short rest.

DeGrom was rescheduled to start Wednesday's opener against Milwaukee All-Star Corbin Burnes (4-4, 2.41), who will remain on his original day.

Anderson will start the second again against a Mets pitched not yet announced.

The tarp was put on the field Tuesday shortly after the Brewers ended batting practice. At 6:15 p.m., a message flashed on the scoreboard warning fans to take cover due to the imminent arrival of severe weather.

Torrential thunderstorms arrived shortly thereafter and only intermittently let up. At least twice, the grounds crew walked on to the tarp to sweep off the water just as the rain increased.

After offering a handful of reassurances the game would be played, including a tweet expressing hope the weather would "improve between 8-9pm" - Cohen tweeted the news of the cancellation at 9:40 p.m.

"We tried but weather didn't cooperate," Cohen wrote. "I can control some things but that isn't one of them."