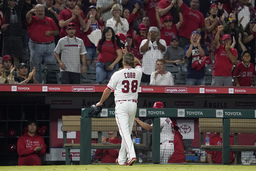 ANAHEIM, Calif. (AP) Fans at Angel Stadium on Saturday night weren't treated to an offensive display by Shohei Ohtani. Instead, they witnessed something that hasn't happened often the past couple seasons - a long outing by an Angels starting pitcher.

Alex Cobb allowed only one run in a season-high 7 2/3 innings and provided a much-needed boost to a starting rotation that has struggled as Los Angeles beat the Baltimore Orioles 4-1 for their third straight win.

It was the longest outing by an Angels starter since Griffin Canning went eight innings last Aug. 30 against Seattle. Cobb - who was with the Orioles from 2018-20 before being traded to Los Angeles prior to spring training - allowed four hits and struck out five with only one walk.

"From the middle of the game yesterday going up to tonight I knew that type of outing that needed to be done," said Cobb, who improved his record to 6-3. "The bullpen has been picking us up big time and the offense has been covering for our mistakes."

Joe Maddon, who previously managed Cobb in Tampa Bay, said he didn't have any doubts about Cobb going out for the eighth.

"I thought there was more in the tank the way things were finishing," Maddon said. "The fastball was really alive and he had good command to it and the knuckle curve was outstanding."

Ohtani, who leads the majors with 30 home runs and had gone deep four times this week, was 0 for 2, along with being intentionally walked twice for the first time in his big-league career. He is also the first Angels player in six years not named Mike Trout to get a pair of intentional passes in a game.

Both times it happened there was a runner on third base. Anthony Rendon couldn't take advantage though as he went 0 for 4 and struck out twice.

Until Trout returns from his calf injury sometime after the All-Star break, Maddon said he might look at adjusting the order to try to protect Ohtani. But Maddon also noted that the strategy depends on what the other team is doing. Baltimore's pitching staff has the highest ERA in the majors at 5.47.

"You can't blame the other other team for doing that. So it's up to us now to make the appropriate change," Maddon said.

Orioles manager Brandon Hyde said that intentionally walking Ohtani was their way of limiting the damage.

"There's no disrespect to Rendon who I've seen too many times over the years get huge hits. I think he's a great player and a really good hitter. Just right now Ohtani is breathing on a planet and playing a different game than the rest of us," Hyde said.

David Fletcher's leadoff single in the first gave him a new career high hitting streak at 17 games. It also tied him with Houston's Jose Altuve (May 5-23) for the longest in the AL this season. Fletcher is batting .388 (26/67) with six doubles and eight RBI's during his streak.

Phil Gosselin drove in a pair of runs and Jared Walsh had two hits for the Angels, who are 41-41 with victories in five of their last six games. Raisel Iglesias retired Baltimore in order in the ninth for his 16th save.

Ramon Urias had two hits and Pat Valaika drove in Baltimore's only run. Jorge Lopez (2-11) was charged with four runs and seven hits in 4 2/3 innings. Lopez, who leads the majors in losses, struck out four and walked four.

The Angels quickly loaded the bases against Lopez on Fletcher's single and walks to Ohtani and Rendon. Jared Walsh followed with an RBI on an infield single up the middle and Gosselin's grounder drove in Ohtani.

Los Angeles extended its lead to 3-0 on Juan Lagares' RBI double to left-center.

Baltimore responded in the third with a win. Domingo Leyba drew a leadoff walk, advanced to third on Urias ' single and scored on Valaika's grounder.

The Angels added a run in the fifth. Walsh doubled off the left field wall with two outs and scored on Gosselin's single.

Orioles: LHP John Means (left shoulder strain) will make his first rehab start for High-A Aberdeen on Sunday and is expected to throw two or three innings. ... RHP Cesar Valdez (lower back strain) could be ready to rejoin the bullpen either Sunday or early next week.

Angels: RHP Griffin Canning was optioned to Triple-A Salt Lake after posting a 7.11 ERA in his last three starts. Maddon said the biggest reason why Canning was sent down was to work on his fastball command. Los Angeles selected the contract of Andrew Wantz, to take Canning's spot. The right-hander is expected to work out of the bullpen. ... OF Justin Upton (right low back strain) is on track to be called up on Sunday after Scott Schebler was designated for assignment.

Angels LHP Patrick Sandoval (2-2, 3.89 ERA) has won his last two starts after setting a team record with 19 consecutive winless starts to begin his career. He will be opposed by Orioles RHP Thomas Eshelman (0-1, 6.57 ERA), whose only previous appearance against the Angels was in relief in 2019.