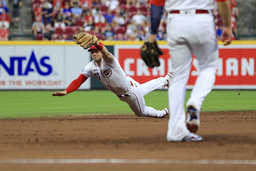 CINCINNATI (AP) Heath Hembree says relievers need to have short memories to survive the grind of the long season.

For one night at least, this one was pretty sweet.

Hembree closed out a strong performance by Cincinnati's beleaguered bullpen, and the Reds handed the Chicago Cubs their seventh straight loss with a 2-1 victory on Friday.

Joey Votto hit a two-run double in the sixth, and that was more than enough for five Reds relievers who combined for four scoreless innings.

"We kind of just passed the ball off to each other," Hembree said. "Each guy who came in did his job."

Cincinnati also got a strong performance from Sonny Gray, who struck out eight in five innings in his first big league start since June 8. He had been sidelined by a strained right groin.

After Gray departed, Art Warren and Josh Osich (1-0) combined to work the sixth. Amir Garrett got two outs and Brad Brach worked 1 1/3 innings. Hembree finished the six-hitter for his second save.

It was a huge boost for a revolving-door bullpen with the worst ERA in the majors.

"Maybe we turned the corner here and can get on a roll," Brach said.

Ian Happ singled for Chicago with two out in the ninth, but pinch-hitter Rafael Ortega struck out swinging for the final out.

"They were above and beyond tonight," Cincinnati manager David Bell said. "We asked a lot of each guy. All of them were just outstanding. To hold them right there for that many innings was impressive."

The Cubs wasted a solid start by Alec Mills (3-2), who breezed through the first five innings, allowing just one hit.

With two on in the sixth, Chicago manager David Ross called on left-hander Adam Morgan to face the lefty-batting Votto with two outs. Votto responded with a liner into the right-field corner.

Jason Heyward drove in the only run for the Cubs with a two-out double in the fourth.

Chicago fell 7 1/2 games back of NL Central-leading Milwaukee. They were swept in a three-game set against the Brewers before arriving in Cincinnati.

"We're in a skid and losing sucks," said first baseman Anthony Rizzo, who went 0 for 3 with three strikeouts. "Every cliche in baseball is going to be used. It is day by day, pitch by pitch. We have to stick together."

The crowd of 40,854 was the first sellout since Great American Ball Park went back to full capacity in June.

Cubs: CF Kris Bryant (side) and Rizzo (back) returned to the lineup. 3B Patrick Wisdom also was back after leaving Wednesday's game with a stiff neck and eye contusion from a collision with Milwaukee's Tyrone Taylor while playing first base.

Reds: CF Tyler Naquin (sore right wrist) returned to the starting lineup for the first time since Saturday. He got two at-bats off the bench in the Padres series. ... Right-hander Michael Lorenzen (shoulder) pitched a scoreless inning in a rehab appearance in the Arizona rookie league. He hasn't pitched for the Reds this season but could rejoin the club after the All-Star break.