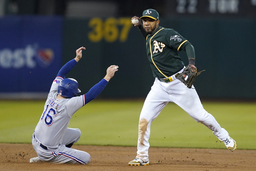 "Just kind of doing his thing like we've seen him so many times this year," A's manager Bob Melvin said. "Had to get out of a jam in the sixth and they hit a couple balls hard in the seventh, but that's what an ace does."

Joey Gallo homered for the fourth consecutive game for the Rangers, who had won four straight.

"(Bassitt) didn't give us much," Texas manager Chris Woodward said. "We put some pressure on him at times but he pitched his way out."

Bassitt (9-2) set down 16 of his first 18 batters and pitched out of a two-out jam with runners on the corners in the sixth when he got Gallo to ground out to first on a 3-2 pitch.

Bassitt, who beat the Rangers on June 24, has not lost since April 6 and has the longest active winning streak in the majors.

"I had a lot better fastball than they saw the previous time, so I knew I was kind of in the driver's seat to start," Bassitt said. "Then it was just a matter of executing."

Yusmeiro Petit retired three batters. Lou Trivino allowed Gallo's homer with one out in the ninth - the sixth in four games by the Rangers slugger - and back-to-back singles before getting the final two outs for his 13th save, the first by an A's reliever in nearly two weeks.

A day after being called up from the minors on his 29th birthday, Schwindel stood at the plate in the second inning and watched after sending a 1-0 pitch from starter Kolby Allard down the left field line into the second deck. Schwimel pumped both arms back and forth in the A's dugout while being congratulated by his teammates, then waited briefly while umpires reviewed and confirmed the call.

"I normally don't watch them but I stood there and made sure it hit the seats in fair territory," Schwindel said. "I got nervous for a second but once I saw (the umps) do the little home run sign, I was feeling pretty good."

Schwindel made his majors debut with the Royals and played six games in 2019. He was called up to add a much-needed right-handed bat to Melvin's lineup while Mark Canha and Stephen Piscotty recover from injuries.

"The energy he brought right way was pretty awesome, the Frank the tank celebration in the dugout," Bassitt said. "If you can score early, not that it changes my game plan, but it makes my life a heck of a lot easier."

Allard (2-4) allowed three runs and four hits in six innings. He struck out five and walked one.

"That (second) was the only inning he actually fell behind hitters," Woodward said. "Kolby was realy good the rest of the game."

Rangers: C Jose Trevino is day to day and will continue to be monitored after bruising his right faorearm while slipping in his hotel room Tuesday. ... C/DH Sam Huff is hitless in two games of a rehab assignment with ACL Rangers (Rookie).

Athletics: Canha received a PRP injection in hopes of aiding his recovery from a strained left hip. Canha has been on the injured list since June 25 and is eligible to come off Monday. ... Piscotty (sprained left wrist) participated in full workout before the game. Melvin is uncertain whether Piscotty will need a rehab assignment.

Athletics LHP Sean Manaea (6-4, 2.91 ERA) pitches the series finale Wednesday and has seven wins in 13 career starts against the Rangers. RHP Dane Dunning (3-6, 4.63) goes for Texas having won one of his previous five starts.