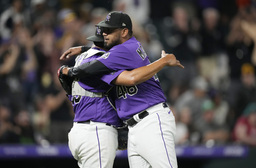 DENVER (AP) German Marquez had a no-hitter was within reach, no surprise given his recent outings.

Marquez came within three outs of what would have been a record-tying eighth no-hitter this season before allowing a single Ka'ai Tom's single leading off the ninth inning in the Colorado Rockies 8-0 win over the Pittsburgh Pirates on Tuesday night.

"I've been thinking about it," said Marquez, who has allowed one run and four hits over 23 innings in winning his last three starts. "Everything is there. My delivery is there. My confidence is there. It was close. Just one pitch. It was one pitch and he put a good swing on it."

The 26-year-old Venezuelan right-hander faced one batter over the minimum.

Tom, a .145 hitter coming in. reached when he lined an 0-1 knuckle-curve into right field. Michael Perez then grounded into a double play and Adam Frazier grounded out

Before that, Jacob Stallings was hit in the left ribs by a knuckle-curve with a 1-2 count and one out in the second inning, and Phillip Evans checked his swing and walked on a 3-2 slider that went low and outside with one out in the fifth. Kevin Newman then grounded into an inning ending double play.

Adam Frazier led the game off with a liner that first baseman Joshua Fuentes caught with a dive. "We didn't have a lot of solid contact," said Pirates manager Derek Shelton, whose club was shut out for the second consecutive game. "The very first ball of the game, Frazier hit it hard down the line and Fuentes made a nice play on it. Other than that, we didn't hit a lot of things on the barrel. He did a really nice job keeping us off the barrel. I think that the mix of his breaking ball . he commanded the breaking ball extremely well and then mixed in the fastball, especially late, and that's what gave us problems. His tempo was really good all night."

Ke'Bryan Hayes led off the seventh with a slow-rolling comebacker that shortstop Trevor Story scooped up on the run to get Hayes at first by a step. Story made a leaping catch on Stallings' liner starting the eighth.

Marquez (7-6) struck out five and walked one, throwing 65 of 92 pitches for strikes in his fourth complete game and second shutout in 123 starts. He has allowed one earned run or fewer in eight of his last 10 starts and was coming off a June 23 outing at Seattle in which he retired his first 17 batters.

There have been seven no-hitters this season. The only season with eight was in 1884, the first year pitchers were allowed to throw overhand.

There has been only one no-hitter at Coors Field, the Rockies' hitter-friendly home since 1995. Hideo Nomo of the Dodgers no-hit the Rockies on Sept. 17, 1996, a 9-0 Los Angeles victory.

The only Rockies pitcher to throw a no-hitter is Ubaldo Jimenez against the Braves in Atlanta on April 17, 2010.

Pittsburgh was shut out for the second straight night and fifth time this season. Colorado pitched just its third shutout.

Elias Diaz homered for the second time in two games, a solo shot in the three-run fifth.

Marquez, a 2018 Silver Slugger winner, doubled twice and drove in a run.

Colorado went ahead in the second when Garrett Hampson hit an RBI double and scored on a single by Joshua Fuentes.

Pirates: INF Colin Moran, who left Monday's game after being hit by a pitch in his first at-bat, is day to day with a bruised left wrist.

Rockies: LHP Kyle Freeland, who left Monday's game after five scoreless inning due to a leg cramp, was optimistic he can take his next turn.

Pirates: RHP Chad Kuhl (2-4, 5.05 ERA) will be seeking a third consecutive win when he takes the mound in Wednesday's series finale against the Rockies.