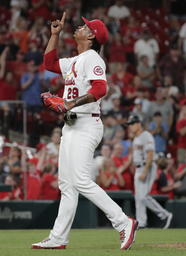 Martinez (4-9) allowed one run, four hits and two walks in six innings. He had been 0-5 in seven starts since beating Colorado on May 8.

"I had a lot of frustration the last five starts," Martinez said. "Right now I feel comfortable. Today was my best focus this season."

Adam Wainwright had been the only Cardinals starter with a win since John Gant's victory at the Chicago White Sox on May 26. Martinez improved to 4-1 with a 2.62 ERA in 14 appearances against the Diamondbacks.

Alex Reyes pitched two innings for his 19th save in 19 chances, finishing a six-hitter.

Arizona lost its third straight on the road since winning Saturday at San Diego to end a record 24-game road losing streak. The Diamondbacks are a major league-worst 22-59, including 10-35 away from home.

"I think this group, based on the reaction that I've seen over the last few weeks, there's a lot of frustration and a lot of pain," Diamondbacks manager Torey Lovullo said. "We've got to just take that pain and frustration and turn it into growth. I think that's what winning people do."

"He's always been a tough at-bat for me," Arenado said about Smith. "I tried to get his fastball down, and even though I swung at a ball there I was able to get on top of that ball and, obviously, it went out of the ballpark."

Smith appeared to have caught Tommy Edman leaving for second base too early for the final out of the fifth inning, but his throw caromed past first baseman Pavin Smith allowing Edman to advance to third and Arenado to bat.

Eduardo Escobar cut the deficit with an RBI single in the sixth, but Edman singled in a run in the bottom half.

Andrew Miller forced in a run with a bases-loaded walk to Smith in the seventh.

Arizona recalled INF/OF Andrew Young from Triple-A Reno and optioned LHP Alex Young to Reno, a night after he allowed six runs in the seventh inning and took the loss.

Diamondbacks: OF Kole Calhoun (strained left hamstring) started in right field and went 0 for 1 for Triple-A Reno before being removed from the game in the fourth inning.

Cardinals: OF Harrison Bader (fractured rib) went 1 for 2 with a walk and started in center field in his first game with Triple-A Memphis on a rehabilitation assignment.

RHP Riley Smith (1-3, 5.71 ERA) will be making his sixth start of the season and first since May 14 vs. Washington in Wednesday's series finale. LHP Kwang Hyun Kim (1-5, 3.98 ERA) will start for St. Louis. Kim allowed four runs and nine hits in five innings at Arizona on May 30 in his only career appearance against the Diamondbacks.