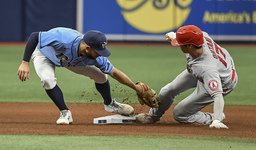 Ohtani hit an opposite-field shot to left in the ninth against Pete Fairbanks. He also had a run-scoring double in the sixth and a tying RBI triple during the Angels' two-run seventh inning.

"He really likes the moment," Los Angeles manager Joe Maddon said. "He loves to play baseball. He loves to compete. He has a really high baseball IQ. He sees things and then goes in and does it."

Ohtani has 46 extra-base hits this season.

"He can beat you in many ways," Tampa Bay manager Kevin Cash said. "He hangs in there against lefties. He's willing to go the other way, like he showed for the home run."

Phil Gosselin put the Angels up 5-4 with his leadoff homer in the eighth against Matt Wisler (1-3).

Tony Watson (3-3) worked one inning for the win, and Raisel Iglesias got four outs for his 13th save.

Brandon Lowe and Ji-Man Choi homered for the Rays, who had won four in a row.

Choi's run, charged to Mayers, ended the right-hander's season-long stretch of not allowing a run on the road at 14 games.

Franco had been hitless in 18-at bats since collecting a homer and double in his major league debut Tuesday.

David Fletcher opened the sixth with a single and scored on Ohtani's double off Ryan Yarbrough, lifting the Angels to a 2-1 lead.

Maddon moved Fletcher, who has a 12-game hitting streak, from ninth to leadoff. Ohtani had hit first the previous two games.

Tampa Bay was held hitless by Sandoval until Lowe tied it at 1 with his 15th homer with two outs in the fifth.

Ohtani walked, swiped second for his 11th stolen base and scored on an infield single by Gosselin in the fourth.

"He's special," Rays catcher Mike Zunino said. "Being able to see him three days in a row hitting-wise is impressive. Then knowing every fifth or sixth day on the mound throwing 100 (mph), an unbelievable talent."

Ohtani went 6 for 11 with two homers and five RBIs in the three-game series. He has eight homers in his last 11 games overall.

Los Angeles had two on in the third when Fletcher hit into an unique inning-ending double play. His pop fly along the first-base line was caught by second baseman Lowe, who threw wildly to the plate with the ball ending up near the third-base dugout.

Yarbrough backed up the play and made a throw to catcher Zunino, who was up the third-base line but was able to tag Taylor Ward as he tried to score from third.

Rays left-hander Rich Hill is looking forward to batting when he faces Washington on Tuesday night.

But the 41-year-old Hill knows that his time at the plate may be ending with a new collective bargaining agreement possibly bringing the designated hitter to both leagues.

"You get to play the whole game," he said. "You get a hit, you get on base. You get to run the bases. You feel like a kid. It feels great."

"He could help us this year, we believe that," Maddon said. "That definitely is on the horizon."

Angels: C Kurt Suzuki, hit on the mask by a ball on Wednesday, started.

Rays: Following an off day, Hill (6-2) starts at Washington on Tuesday night. RHP Joe Ross (4-7) gets the ball for the Nationals.