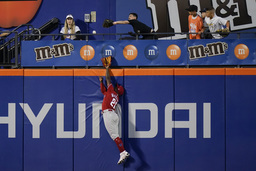 NEW YORK (AP) Aaron Nola went on a record-tying run of strikeouts and Bryce Harper sealed his homer with a kiss.

Long day of baseball at Citi Field, but it certainly wasn't bland.

Harper blew smooches at a booing crowd to punctuate his drive, and the Philadelphia Phillies beat the New York Mets 2-1 in eight innings Friday night for a doubleheader split after Nola matched a long-standing major league mark with 10 straight Ks in the opener.

"In today's game, what an accomplishment," Harper said. "I'll always remember that one."

Odubel Herrera drove in the tiebreaking run with a groundout against Mets reliever Sean Reid-Foley (2-1) in the eighth as both games took an extra inning to decide.

"Pretty cool being in a category with Tom," Nola said. "It's a cool accomplishment, but winning's cooler in my opinion."

In the nightcap, New York loaded the bases with nobody out in the bottom of the seventh, but Archie Bradley (3-1) allowed only pinch-hitter James McCann's tying sacrifice fly.

Demoted closer Hector Neris retired Lindor, Pete Alonso and Smith with the automatic runner in scoring position for his 11th save in 16 chances. Neris struck out Smith to end it as Philadelphia's beleaguered bullpen finally closed one out to snap a four-game slide.

"It's the difference in the game, for sure," Philadelphia manager Joe Girardi said. "Just a great play."

Harper hit his 11th homer of the season and third in four games on an 0-2 pitch from starter David Peterson to put the Phillies ahead 1-0 in the sixth.

When he reached the dugout, Harper donned the team's oversized straw home run hat and feigned kisses to agitated Mets fans, even popping back out to wave again.

"Fired up with the boys of course, and I have a lot of fans here in Citi Field so just thought I'd say hi and let them know I'm still here," Harper said. "It's always fun coming in here. We always badger back and forth. I mean, we have ever since I was 19."

In the opener, Nola was one strike from standing alone in pitching history. He settled for a tie with Seaver at 10 Ks in a row before the Phillies blew another lead.

New York took advantage of an embarrassing two-base error by reliever Jose Alvarado, who overthrew first base on a comebacker while clinging to a 1-0 advantage in the seventh.

First baseman Rhys Hoskins, with sunglasses perched uselessly atop the bill of his cap, had trouble seeing the ball in the evening glare and ducked a bit as the throw sailed just over his mitt.

That led to Lindor's tying single with two outs, and Smith - after squaring to bunt on a previous pitch - won it with an RBI single off Ranger Suarez (3-2) in the eighth.

"I think it was real important that we bounced back," Girardi said. "You don't lose too many games where a first baseman loses the ball in the sun. It's probably a matter of 10 or 15 minutes. If it's before or after we're probably fine. It's an unbelievable way to lose a game."

Seaver fanned his final 10 hitters for the Mets in a 2-1 victory over the San Diego Padres at Shea Stadium on April 22, 1970.

The Hall of Famer's mark for consecutive strikeouts remained unmatched for more than five decades until Nola whiffed Michael Conforto with a changeup leading off the fourth at Citi Field, which replaced Shea Stadium as the Mets' home in 2009 on an adjacent site in Queens.

"I guess I wasn't really thinking about anything except getting him out," Nola said, adding he'll probably get the souvenir ball authenticated and put it in a little box at home.

"I got no pop," a grinning Nola said with a chuckle. "I thought I got my first one."

The right-hander equaled a career high with 12 strikeouts in 5 1/3 innings of two-hit ball, but the Phillies couldn't hang on.

Seth Lugo (1-0) struck out three in the top of the eighth and stranded two runners for the NL East leaders, who have split three doubleheaders in seven days.

Featuring a nasty knuckle curve, Nola started and ended his streak with punchouts of Conforto. With the crowd chanting his name, Alonso halted the astounding run of strikeouts when he reached across the plate to poke a 1-2 slider inside the right-field line for a line-drive double.

Nola actually got off to an inauspicious start. He hit leadoff batter Jeff McNeil with a curveball in the first inning and then gave up a double to Lindor that left runners at second and third.

The right-hander struck out Conforto, Alonso and Smith in succession to keep New York off the scoreboard, and didn't stop there. James McCann, Kevin Pillar and Luis Guillorme went down in the second, then Walker, McNeil and Lindor in the third - all wearing a patch with Seaver's retired uniform No. 41 on their sleeves.

"They knew there was a string of strikeouts going on, and they knew how good he was because they kept talking about it," Rojas said.

"Nola threw unbelievably well. That game's got to be won and we weren't able to do it," Harper said.

Under pandemic rules, both games were scheduled for seven innings in a doubleheader created to make up an April 15 rainout.

In the second game, Phillies starter Matt Moore allowed three hits over five shutout innings in an encouraging return from the injured list.

"Shot in the arm for us right there," Harper said.

BACK IN THE BIGS

Philadelphia called up reliever Neftali Feliz, the 2010 AL Rookie of the Year, from Triple-A Lehigh Valley. Feliz hasn't pitched in the majors since August 2017 with Kansas City.

Mets: Marcus Stroman threw a bullpen and felt "really good," Rojas said. "Everything was on point." The right-hander plans to take his next scheduled turn Sunday or Monday. He left Tuesday's outing early with a sore hip. ... Between games, 3B Jonathan Villar (calf) was placed on the 10-day IL, retroactive to Tuesday, with a strained right calf. INF Travis Blankenhorn was recalled from Triple-A Syracuse. ... OF Brandon Nimmo (left index finger) is expected back next week, Rojas said.