Nola ties mark with 10 Ks in row, but Mets rally past Phils 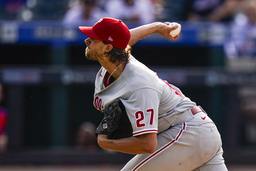 He settled for a tie with Tom Seaver - which would have felt much better if Philadelphia's beleaguered bullpen didn't blow another lead.

Nola struck out 10 straight batters to match Seaver's major league record set 51 years ago, but the New York Mets rallied past the Phillies 2-1 in eight innings Friday on big hits by Francisco Lindor and Dominic Smith during the first game of a doubleheader.

"Pretty cool being in a category with Tom," Nola said. "It's a cool accomplishment, but winning's cooler in my opinion."

New York took advantage of an embarrassing two-base error by reliever Jose Alvarado, who overthrew first base on a comebacker while clinging to a 1-0 lead in the seventh inning of a game scheduled for seven under pandemic rules.

First baseman Rhys Hoskins, with sunglasses perched uselessly atop the bill of his cap, appeared to have trouble seeing the ball in the evening glare and ducked a bit as the throw sailed just over his mitt.

That led to Lindor's tying single with two outs, and Smith - after squaring to bunt on a previous pitch - won it with an RBI single off Ranger Suarez (3-2) in the eighth.

"We just had a tough game against a very tough pitcher and the guys didn't give up," New York manager Luis Rojas said.

Seaver fanned his final 10 hitters for the Mets in a 2-1 victory over the San Diego Padres at Shea Stadium on April 22, 1970.

The Hall of Famer's mark for consecutive strikeouts remained unmatched for more than five decades until Nola whiffed Michael Conforto with a changeup leading off the fourth at Citi Field, which replaced Shea Stadium as the Mets' home in 2009 on an adjacent site in Queens.

"I guess I wasn't really thinking about anything except getting him out," Nola said, adding he'll probably get the souvenir ball authenticated and put it in a little box at home.

"I got no pop," a grinning Nola said with a chuckle. "I thought I got my first one."

The right-hander equaled a career high with 12 strikeouts in 5 1/3 innings of two-hit ball, but a struggling bullpen was unable to hang on as the Phillies dropped their fourth in a row.

Seth Lugo (1-0) struck out three in the top of the eighth and stranded two runners for the NL East leaders, playing their third doubleheader in seven days.

"Every loss is tough right now, especially (to) these guys," Nola said. "They're in first place and this is a big series for us."

Featuring a nasty knuckle curve, Nola started and ended his streak with punchouts of Conforto. With the crowd chanting his name, Pete Alonso halted the astounding run of Ks when he reached across the plate to poke a 1-2 slider inside the right-field line for a line-drive double.

Nola actually got off to an inauspicious start. He hit leadoff batter Jeff McNeil with a curveball in the first inning and then gave up a double to Lindor that left runners at second and third.

The right-hander struck out Conforto, Alonso and Smith in succession to keep New York off the scoreboard, and didn't slow down. James McCann, Kevin Pillar and Luis Guillorme went down in the second, then Walker, McNeil and Lindor in the third - all wearing a patch with Seaver's uniform No. 41 on their sleeves.

"They knew there was a string of strikeouts going on, and they knew how good he was because they kept talking about it," Rojas said. "We've seen him lights out and this is, when he's lights out, that's how he is."

Seven of the strikeouts during Nola's string were swinging. He caught Smith, McCann and Walker looking.

BACK IN THE BIGS

Philadelphia called up reliever Neftali Feliz, who hasn't pitched in the majors since August 2017 with Kansas City. Before this season, he hadn't even appeared in affiliated ball since 2018. The 2010 AL Rookie of the Year was added to the 40-man roster when his contract was selected from Triple-A Lehigh Valley.

Mets: Marcus Stroman threw a bullpen and felt "really good," Rojas said. "Everything was on point." The right-hander plans to take his next scheduled turn in the rotation Sunday or Monday. He left Tuesday's outing early with a sore hip. ... Between games, 3B Jonathan Villar (calf) was placed on the 10-day IL, retroactive to Tuesday, with a strained right calf. INF Travis Blankenhorn was recalled from Syracuse and was active for the second game. ... OF Brandon Nimmo (left index finger) is expected back next week, Rojas said.

Phillies LHP Matt Moore (0-1, 7.36 ERA) started the nightcap against LHP David Peterson (2-5, 5.31). Moore came off the 10-day injured list Wednesday. He had been sidelined since May 21 with lower back spasms, and hadn't started in the majors since April 17.