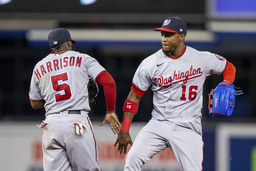 MIAMI (AP) Kyle Schwarber homered twice, raising his season total to 21 by hitting 12 in his past 13 games, and the Washington Nationals beat the Miami Marlins 7-3 Thursday night for their 10th win in 11 games.

Schwarber led off the first pulling a hanging curveball from Cody Poteet (2-3) to right for his fifth leadoff home run this season.

Josh Harrison singled with one out in the second, Victor Robles walked, and with two outs Schwarber sent a 0-2 fastball over the wall in center for a 4-0 lead.

"You're not going up there expecting to hit home runs every time you're up at the plate," Schwarber said. "But hitting a home run when you're locked in the plate, good things happen."

Schwarber became the first player in major league history to homer 11 times in a 13-game span from the No. 1 slot in the batting order, according to STATS. He became the fourth player with eight home runs and 15 RBIs in a five-game span, joining Shawn Green, Manny Ramirez and Frank Howard.

"When he's like that, you don't say much to him," Nationals manager Dave Martinez said. "You let him go out there and play the game and let him get his swings. He's been awesome getting us going. He's knocked in some big runs for us. Hopefully he's hot for a while."

Juan Soto added the first of his two RBI doubles later in the inning.

"It's a little more satisfying that we're going out there and winning baseball games," Schwarber said. "I'm not the only component to this - trust me."

Poteet gave up five runs, six hits and four walks in three innings. The 26-year-old rookie right-hander is 0-3 in his last four starts after going 2-0 in his first three big league outings.

"I just haven't been sharp," Poteet said. "Definitely not the start you want."

"The five early obviously hurt us," Marlins manager Don Mattingly said. "The way we've been swinging the bats, it doesn't put you in a good spot."

Jazz Chisholm hit a three-run homer in the eighth against Justin Miller, Chisholm's ninth homer and first since June 10.

Before the national anthem, there was a moment of silence for the victims of the condo building that collapsed Thursday in Surfside, Florida. The coastal town adjacent to Miami Beach is 13 miles from the Marlins stadium.

"I couldn't really tell you in the first today is going to be a good day," Ross said. "You have to think that way and hopefully it turns out like that."

Nationals: 1B Josh Bell (right side discomfort) was a late scratch and will undergo an MRI Friday, Martinez said. RHP Stephen Strasburg (neck strain) has been throwing from 150 feet with increased intensity but there is no timetable on when he might throw from a mound.

Marlins: RHP Jordan Holloway (groin) was activated from the injured list and optioned to Triple-A Jacksonville.