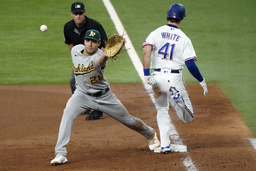 ARLINGTON, Texas (AP) Chris Bassitt is on quite a roll for the Oakland Athletics since being their opening day starter and then losing his first two games. He hasn't lost since.

Bassitt limited Texas to five singles while pitching seven innings to win his eighth consecutive decision, the longest winning streak by an American League pitcher this season, as the A's beat the Rangers 5-1 on Thursday for a series split.

"Seven innings nowadays feels like nine for a starter," manager Bob Melvin said. "That's what he sets out to do. He wants to go out there and take some pressure off the bullpen. He wants to pitch deep in games."

Since losing to Houston on April 1, and then against the Los Angels Dodgers five days later, Bassitt (8-2) had gone 8-0 with a 2.95 ERA in 14 starts. It is the longest winning streak in his seven big league seasons, the last six with Oakland.

Jed Lowrie drove in runs with a single and a no-doubt home run for the A's (46-31), whose four-game split dropped then behind Houston in the AL West. The A's arrived in Texas having led the division for all but one day since April 19.

Bassitt was facing what was to be his last batter regardless in the seventh when Isiah Kiner-Falefa, the new Rangers shortstop after they traded 12-year starter Elvis Andrus to Oakland just before spring training, grounded into an inning-ending double play. Andrus made a sliding grab up the middle and flipped to the ball with his glove to second baseman Lowrie for the relay to first.

"An amazing play by Elvis, so he saved me there," Bassitt said.

Lowrie's RBI single in the first was already the fourth hit for the A's, and put them up 3-0 against left-hander Kolby Allard (2-3). Ramon Laureano had an RBI double and another run scored on a groundout.

Allard managed to make it through six innings. The only other run he allowed was Lowrie's 433-foot homer to straightaway center leading off the fourth.

"It was kind of frustrating a little bit," said Allard, who hadn't allowed more than two runs in any of his four previous starts since moving into the rotation. " Obviously settled down fairly good and kind of pitched well the rest of the game, but just frustrating going out there and having the first inning go as it did."

STRANGE TRIP AROUND THE BASES

Texas got its only run after Eli White was hit by a pitch leading off the second, moved up two bases on the same wild pitch and scored on a groundout. White also had two singles and is 8 for 15 his last four games.

The Rangers (27-48) have gone 9-30 since they reached .500 with a win over Seattle on May 9. ... Andrus played the entire series, and had five hits over the last three games. "Not the youngest guy on our team, but he wanted no part of a off day here," Melvin said of the 32-year-old shortstop. ... Joe Barlow, a 25-year-old right-hander selected by Texas in the 11th round of the 2016 amateur draft, made his major league debut and struck out his first two batters in a perfect eighth. "The maturity level, you could see he was calm out there," manager Chris Woodward said.

Athletics: LF Mark Canha left in the third inning because of a left hip strain and will have an MRI on Friday. ... RHP Mike Fiers likely won't throw again for at least four more weeks because of an injection for his sprained right elbow. He visited Dr. James Andrews on Wednesday after he felt discomfort when trying to resume throwing this week. Fiers has made only two starts this season, the last May 6. ... Laureano, the usual center fielder, was the DH for the second time in the series, and only his eighth game since missing 17 because of a straight right hip. "With the injury that he had, if we can get him off the turf here where he feels it a little bit more, I know he does, it's a way to get his bat in the lineup," Melvin said.

Athletics: End the first of their three 10-game trips this season close to home. Left-hander Sean Manaea (6-3, 3.01), who has a 1.19 ERA over his last six starts, pitches Friday night in the opener of a three-game series against the Giants in San Francisco