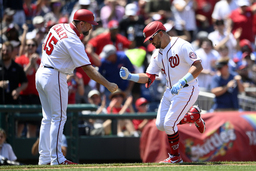 WASHINGTON (AP) Kyle Schwarber homered three times and tied a major league record with five in a two-game span, leading the Washington Nationals over the New York Mets 5-2 Sunday to take three of four in the series.

Schwarber set a Nationals/Montreal Expos record by homering nine times in a 10-game span, increasing his total to 18 this season with his first career three homer-game. Moved in the leadoff spot on June 12, Schwarber had four RBIs for the second straight game.

"To be honest with you, I don't know what's going on," Schwarber said.

He hit a 2-0 fastball from Taijuan Walker (6-3) for his fourth leadoff home run this season, capped an eight-pitch at-bat starting the fifth by homering on a sinker for a 3-1 lead.

"I think he's just locked in right now," Walker said. "He was just hitting every fastball we threw at him."

Schwarber then hit an 0-1 slider from Jeurys Familia for a two-run homer into the Mets' bullpen in left field in the seventh.

"That's as hot as you can get," Mets manager Luis Rojas said.

Schwarber had the sixth three-homer game since the franchise moved to Washington for the 2005 season, the first since Anthony Rendon's 10-RBI game against the Mets on April 30, 2017.

"I'm a big believer that hitting is a feeling. Don't get me wrong, there's mechanical, there's approach, things like that," Schwarber said. "But when you step in the box and everything feels right, you already have a big advantage."

Schwarber's third homer followed a pinch-hit double by Gerardo Parra, a 34-year-old fan favorite who returned to the Nationals on Sunday when his contract was selected from Triple-A Rochester. Parra's walkup music of the children's song "Baby Shark" became a theme of the Nationals' run to the 2019 World Series title, and it sounded before his at-bat to the crowd's delight.

Parra spent last season with the Yomiuri Giants in Japan, then signed a minor league contract with the Nationals last winter.

Patrick Corbin (5-5) allowed two runs and four hits in six innings with seven strikeouts and a walk. He retired 15 of 16 batters on 76 pitches through six innings.

Pete Alonso homered leading off the seventh. ending a 38 at-bat homerless stretch with his 11th this season. Alonso reached 80 home runs in 274 games, third-fewest behind Ryan Howard (245) and Aaron Judge (264).

A shifted third baseman Starlin Castro snagged pinch-hitter Dominic Smith's smash up the middle off Kyle Finnegan for a double play in the seventh.

New York scored just nine runs in the four-game series. Despite going 2 for 14 with runners in scoring position, Washington closed within five games of the NL East-leading Mets.

Walker, who had allowed just two prior homers this season, dropped to 2-3 on the road to go along with a 4-0 home mark. He allowed four runs and a season-high 10 hits in 6 1/3 innings.

Kevin Pillar's sixth homer tied the score in the second, and Josh Bell hit a go-ahead single in the third.

Nationals: RHP Daniel Hudson (right elbow inflammation) is still not throwing a baseball. He has not pitched since June 9 and his recovery is a "slow process," according to Martinez.

Mets: OF Brandon Nimmo (detached hand ligament) went 1 for 2 as began a minor league rehab assignment Sunday with Triple-A Syracuse. Nimmo played just 21 games for the Mets, the last May 2. ... OF Michael Conforto (strained right hamstring) was 1 for 4 with a double against Scranton/Wilkes-Barre's Deivi Garcia. Conforto was playing his third rehab game.

Nationals: RHP Max Scherzer (5-4, 2.21 ERA) is likely to be activated from the 10-day injured list and start Tuesday at Philadelphia.