Lindor breaks out, 5 RBIs lead Mets over Nats 5-1 in opener 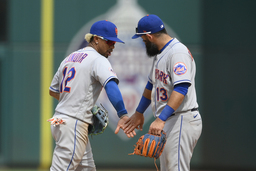 WASHINGTON (AP) Francisco Lindor had five RBIs on a pair of two-run homers and run-scoring single for his first big offensive game with the New York Mets, a 5-1 victory over the Washington Nationals on Saturday in the opener of a day-night doubleheader.

Lindor homered in the first on a sinker from Joe Ross (3-7), singled in the third on a changeup for a 3-0 lead and homered into the second deck in the fifth on a slider for his 12th multi-homer game. The five RBIs were his most since his career-high seven for the Indians on July 2, 2018, at Kansas City.

"I think the first one gave me more satisfaction because it showed the work that I am doing is working," Lindor said.

Cleveland traded Lindor to the Mets in January, and New York signed the 27-year-old to contracts worth $363.2 million over 11 seasons. Lindor, who had not driven in more than two runs in a game this season, is hitting .218 with eight homers and 21 RBIs.

"Once again, I'm just glad he's trusting his power," Mets manager Luis Rojas said. "He can create power and he doesn't need to only pull the ball."

David Peterson threw a season-high 94 pitches but fell short of qualifying for the win, allowing one run and two hits in 4 2/3 innings.

Miguel Castro and Seth Lugo combined to pitch the sixth, and Trevor May finished a four-hitter in a seven-inning game under pandemic rules.

Ross (3-7) allowed five runs and six hits in five innings. He was coming off consecutive starts without allowing an earned run.

Peterson scored New York's first run after he was hit by a pitch and also doubled leading off the fifth for his first big league hit.

"I feel like a full baseball player today," Peterson said.

Mets: RHP Jacob deGrom (right shoulder) threw a full bullpen session on his 33rd birthday and is on track to start one of the the games in Monday's doubleheader against Atlanta. Rojas said deGrom felt normal during a 20-pitch session. DeGrom (6-2, 0.54) left his Wednesday start after three innings because of right shoulder soreness. ... LHP Joey Lucchesi was put on the 10-day IL with left elbow inflammation, a day after pitching 5 1/3 scoreless innings. ... OF Albert Allmora Jr. was activated from the 10-day IL and started the second game. He had been sidelined since May 11, when he bruised his left shoulder charging into an outfield wall.