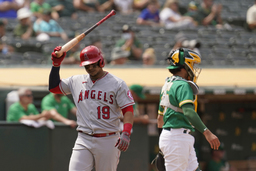 OAKLAND, Calif. (AP) Ramon Laureano hit a home run and made a homer-robbing catch in his return from the injured list, and the Oakland Athletics rallied past the Los Angeles Angels 8-4 Wednesday for their sixth straight win.

Shohei Ohtani homered for the second straight day, giving him 19 for the Angels. He also neatly bunted against the shift for a single and stole his team-leading 10th base, a day before he was scheduled to start on the mound.

Laureano, who missed 17 games with a strained right hip, perfectly timed his jump to reach over the fence and catch Justin Upton's flyball in the fourth. The acrobatic center fielder was credited with the fifth homer-saving grab in his career.

In the bottom of the fourth, Laureano connected for his 12th homer, cutting the Angels' lead to 4-1.

"I just wanted to play," Laureano said. "At the end of the day, with the adrenaline the fans bring, I don't really think about (the injury) when I'm out there. Just kind of compete, get a good at-bat, good, quality pitch and just go after it. It was a good game overall."

Added A's manager Bob Melvin: "We get spoiled with his play. We see it all the time, but it's really good."

Angels starter Griffin Canning limited the A's to two earned runs on three hits and two walks in five innings. But Oakland teed off on lefty reliever Tony Watson during a six-run sixth.

Watson (2-3) faced six batters and didn't record an out, surrendering six earned runs on five hits and a walk.

"His changeup was cutting," Angels manager Joe Maddon explained. "It was not doing it's normal thing. I didn't know that immediately, but I was told that afterward. So that pitch that he normally relies on wasn't reacting like it normally does. I think that was a big part of it."

Matt Olson singled twice in the big inning, finishing 3 for 4 with an RBI. Mark Canha, Matt Chapman, Chad Pinder and Tony Kemp also drove in runs in the inning.

The Angels jumped on Athletics starter Cole Irvin for three runs on five hits in the first inning. But Irvin settled in to pitch 5 2/3 innings for a no-decision.

"Today was one of those days where I didn't have everything," Irvin said. "I had to battle."

Angels: 3B Anthony Rendon missed his second straight game with a strained right triceps but is expected to return as soon as Thursday.

Athletics: Pinder returned after being hit behind his left ear by an 82 mph splitter from Junior Guerra on Monday. He entered the game as a pinch-hitter in the sixth inning and went 2 for 2 with an RBI.

The Athletics reinstated Laureano from the 10-day injured list before the game and optioned OF Skye Bolt to Triple-A Las Vegas. Bolt went 1 for 13 with a home run in nine games with Oakland.