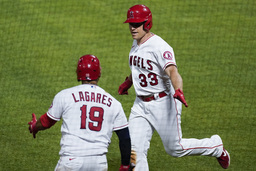 Stassi homered and drove in three runs as Los Angeles defeated Kansas City 8-3 on Monday night for its ninth victory in 13 games.

The Angels catcher, who finished with three hits, has a .318 batting average in 16 games this season. He is 7 for 15 with two home runs and five RBIs since returning last Tuesday from a concussion.

"I'm not surprised," Angels manager Joe Maddon said. "He swung the bat well last year and is doing it again this year. I think as he continues along, you're going to see a pretty good hitting catcher. I don't think it's a fluke."

Stassi had an RBI single off Kowar (0-1) during a four-run first inning and hit a two-run, opposite-field shot to right-center in the fifth.

It was only the fourth time in Stassi's nine-year career that he had three or more hits in a game.

"Anytime you are rehabbing during an injury you look at the finer things you can improve. I put in a lot of work to get my swing right," Stassi said.

Kowar, the 33rd overall pick in the 2018 amateur draft, was 5-0 with an 0.85 ERA and 41 strikeouts in 31 2/3 innings at Triple-A Omaha. But the touted prospect faced only seven batters and threw three wild pitches in his big league debut before being lifted after two-thirds of an inning.

The 24-year-old right-hander allowed four runs on three hits and two walks. He became the second AL starter in the expansion era to give up four or more runs in less than an inning in his major league debut (Taylor Hearn was the other in 2019 for Texas).

"Obviously frustrated with the way it went," Kowar said. "I was expecting to have a lot of juice with being in the game, so I accounted for that, but it's hard to prepare for that until you're out there."

Royals manager Mike Matheny said it was a perfect storm of circumstances that contributed to the short night for Kowar. Of his 39 pitches, 18 were called balls but many weren't too far out of the strike zone.

"He had some close pitches and they fought off some pitches I didn't think they would," Matheny said. "His count got to the point where we had to protect him. I hated to take him out there. He was throwing fine, but I'm just not going to put him in a spot to where we potentially put him in harm.

"You take tonight as one of those growing opportunities. You let it go and look forward to start preparing for the next one."

Kowar's three wild pitches in the first inning marked the first time since 2003 any pitcher had done that in the opening frame.

Hunter Dozier, who came into the game batting .146, went 3 for 4 with two doubles for the Royals.

Kowar got Justin Upton to ground out on his second pitch before things went south as the next four batters reached base.

Shohei Ohtani walked and advanced to second on a wild pitch before scoring on Anthony Rendon's single. Jared Walsh also walked before both runners moved up on another wild pitch. Stassi's RBI single scored Ohtani and gave the Angels a 2-0 lead.

Stassi went to second on a wild pitch before Jose Iglesias made the second out with a grounder that brought in Walsh. Kowar's night ended after Juan Lagares' single drove in Stassi.

The Royals got to 4-2 in the second on Jorge Soler's solo homer to left-center and Dozier's RBI double.

Whit Merrifield's RBI single drew Kansas City to 7-3 in the seventh. Stassi led off the Angels eighth with a double, advanced to third on a wild pitch and scored when Greg Holland committed a balk.

Los Angeles' Kean Wong, making his first start in right field, jumped at the wall to rob Carlos Santana of a home run in the first inning.

Soler was beaned by James Hoyt leading off the ninth but remained in the game. Hoyt was making his Angels debut after he was called up from Triple-A Salt Lake.

Angels: LHP Jose Quintana (left shoulder inflammation) threw well during his bullpen session before the game and could be activated by the end of the week. ... RHP Hunter Strickland was designated for assignment after compiling a 9.95 ERA in nine appearances. Strickland was acquired from Tampa Bay on May 15.

Kansas City LHP Kris Bubic (1-0, 2.12 ERA) allowed a season-high four runs and eight hits in 4 1/3 innings last Thursday against Minnesota. He will be opposed Tuesday by Los Angeles LHP Andrew Heaney (3-3, 4.76), who is looking to earn three straight wins for the first time since 2015.