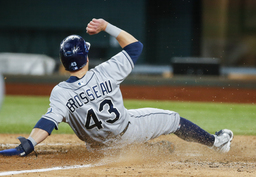 ARLINGTON, Texas (AP) Yandy Diaz started Tampa Bay's late surge with a game-tying walk before a blow-it-open homer, his first of the season.

Rookie Taylor Walls connected for the big hit in between.

Walls followed the Diaz walk with a tiebreaking, two-run double in the eighth inning among a season-high three hits, and the Rays beat the Texas Rangers 7-1 on Sunday.

The AL-leading Rays trailed 1-0 before scoring three runs in the eighth and four in the ninth to get the series victory in their return to the stadium that hosted their neutral-site World Series loss to the Los Angeles Dodgers last fall.

Two errors by Texas shortstop Isiah Kiner-Falefa led to each rally as five of the seven runs were unearned.

Tampa Bay hasn't lost by more than two runs in the past 26 games, the longest run in the AL this season, and found another way to win to get to 3-3 in June after 22 victories in May, the most for any month in franchise history.

"Probably some of the experience from the past, being a little more seasoned in that high intensity, anxiety moment, they've got a knack for putting pressure and coming through," Rays manager Kevin Cash said. "It certainly feels like we are in every ballgame and we can elevate our game a little bit when it gets later in the game."

Tampa Bay loaded the bases with nobody out against Texas reliever John King in the eighth when Brandon Lowe reached on Kiner-Falefa's throwing error, Randy Arozarena singled and pinch-hitter Mike Brosseau walked.

After King (5-4) got fellow lefty Austin Meadows to pop out on a 2-0 pitch, right-hander Josh Sborz came in and walked Yandy Diaz to force home the tying run.

Walls followed with a liner to center that was ruled a double because he took second base with nobody covering. The 24-year-old doubled twice and had a single.

"I really trust my approach," said Walls, who has a hit in four of the past five games coming off a 1-for-12 skid. "I feel like I do my homework and I have the right read on guys."

The Tampa Bay ninth started with Kiner-Falefa's fielding miscue before Meadows had a two-run single and Diaz connected for a two-run shot off left-hander Brett Martin. The Rays avoided their first series loss since dropping two of three to the New York Yankees at home May 11-13.

J.P. Feyereisen (2-2) pitched 1 1/3 scoreless innings in a bullpen game after the Rays decided to give Tyler Glasnow extra rest.

The right-hander got 28-year-old rookie slugger Adolis Garcia as a pinch-hitter on a flyout to the warning track with two on to end the Texas eighth with the Rays leading 3-1.

Nate Lowe brought in the only Texas run against his former team with a double-play grounder in the first inning as the Rangers lost their seventh series in the past eight.

"I feel like so many at-bats early in the game, we gave away," Texas manager Chris Woodward said. "I can point to some of their at-bats in critical moments where they fouled off a certain pitch, fought with two strikes and we didn't. We have the personnel to do it. We have to get better."

Center fielder Kevin Kiermaier kept the Tampa Bay deficit at 1-0 immediately after entering the game in the seventh, ending the inning with a sliding catch on a looping liner from Kiner-Falefa with Jason Martin on third.

"The best version of us is using our entire roster," Cash said. "You're not going to have a bullpen day every day. When it's drawn up, it couldn't have gone any better. Everybody on the bench played a role. We've used our bench and more times than not they've found a way to get it done."

Dane Dunning pitched five scoreless innings with six strikeouts for the Rangers, his third scoreless outing of at least five innings without a decision this season.

Rays: Glasnow (4-2, 2.69 ERA) is scheduled for Tuesday's opener of a two-game interleague series at home against Washington. Glasnow had a 7.53 ERA in five appearances against the Nationals, including two starts, while with Pittsburgh.