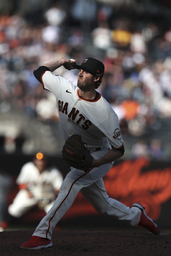 San Francisco won its third straight over the Cubs. The Giants have won nine of 11 overall and are a majors-best 37-21.

Gausman (7-0) allowed two hits and a pair of unearned runs, lowering his ERA to 1.27, for his first victory in four career appearances against the Cubs.

"Just one mistake," Giants manager Gabe Kapler said. "There was a good bit of swing and miss against a really tough top of that lineup. We saw him come out with some of his best fastball velocity that he's had all season, maintain it, and then empty the tank there in the seventh."

Chosen the NL's Pitcher of the Month for May earlier this week, Gausman overcame Wisdom's homer in the second and retired the final 15 batters he faced after a leadoff single by opposing starter Kohl Stewart in the third.

"There were some pitches I definitely got away with but that was the only one they kind of made me pay for," Gausman said. "(Wisdom's) got some power and didn't miss that one."

Jake McGee retired three batters. Tyler Rogers allowed an unearned run in the ninth, but got Jason Heyward to ground out with runners on second and third for his eighth save.

"Torture baseball, there's no better way to explain it," Giants catcher Chadwick Tromp said. "A roller-coaster ride but for us there was never a doubt we were going to get the job done."

The Giants survived a scary moment in the ninth when shortstop Brandon Crawford collided with third baseman Evan Longoria while both were going for Anthony Rizzo's grounder.

Crawford got up quickly but Longoria - who was charged with an error on the play - remained down for several moments as a team trainer came out. Longoria exited the game with a possible left shoulder/collarbone injury.

"It's two guys who are elite at defending their positions going 100 percent to convert a groundball to an out," Kapler said. "You don't see it very often on the infield but it happens and it's nobody's fault."

The Cubs had won nine of 10 before making their first trip to the West Coast since 2019. Heyward went 0 for 4 for Chicago after coming off the injured list before the game.

"I don't think we've played terrible baseball," Cubs manager David Ross said. "The first couple of games we came up short on the front end. Today their pitcher was pretty darn good. The offense wasn't really on point today and a lot of that goes to their starting pitcher."

Scott Kazmir, the 37-year-old left-hander who returned to the major leagues two weeks ago after nearly five years away, was designated for assignment by the Giants. A three-time All-Star, Kazmir was 0-1 with a 6.43 ERA in three appearances (two starts) for San Francisco. He started against the Cubs on Friday and lasted two innings, giving up a two-run homer to Kris Bryant in the first inning.

The Giants celebrated Pride Month by wearing Pride colors in the logo on their hats and with a patch stitched into the right sleeves of their jerseys - the first major league team to do so.

Honey Mahogany, a drag performer who was recently elected as the first transgender and first Black to chair the San Francisco Democratic Party, sang the national anthem before the game. A Pride flag flew in the arcade near stands in right-center field.

"It's an exciting moment for our team, for our organization," Kapler said before the game. "We're all standing behind the (LGBTQ+) community."

The Giants will host Pride Movie Night at Oracle Park on June 11-12.

In addition to activating Heyward, the Cubs recalled RHP Cory Abbott from Triple-A Iowa, claimed RHP Dakota Chalmers off waivers from the Twins and optioned him to Double-A Tennessee and optioned LHP Brad Wieck to Iowa. OF Nick Martini was designated for assignment.

Cubs: Leadoff hitter Joc Pederson, who homered in each of the first two games of the series, left after four innings because of lower back tightness. Pederson first felt it when he ran into the wall trying to case down Dickerson's home ruun in the third. OF Jake Marisnick (right hamstring strain) will have a day off Sunday from his rehab. Marisnick ran before Saturday's game.

Giants: 1B Brandon Belt is close to returning from the left oblique strain that landed him on the Injured List on May 26 but "isn't 100 percent yet," according Kapler. . San Francisco extended the rehab assignment of Tyler Beede. The right-hander is working his way back from Tommy John surgery in March 2020.

San Francisco's Johnny Cueto (4-1, 3.45 ERA) and Chicago's Kyle Hendricks (6-4, 4.62) pitch in the series finale in a matchup of right-handers Sunday. Cueto has 16 strikeouts and one walk over his previous 21 1/3 innings. Hendricks has allowed 16 home runs, most in the majors.