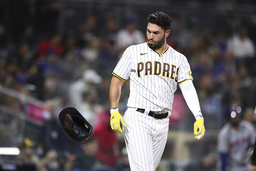 SAN DIEGO (AP) Jacob deGrom kept up his dominance of major league hitters, striking out 11 over seven innings and lowering his ERA to 0.62 to pitch the New York Mets past the high-powered San Diego Padres 4-0 Saturday night.

Francisco Lindor homered and doubled to back the latest brilliant performance by deGrom (5-2). The Mets ended San Diego's team-record 12-game home winning streak that began a month ago on May 5.

In complete charge throughout, deGrom allowed just three hits and walked one. The two-time NL Cy Young Award winner has given up just four earned runs in 58 innings, His ERA is the lowest through nine starts of any pitcher with at least 40 innings since ERA became an official statistic in both leagues in 1913. His 0.57 WHIP also is the lowest since at least 1901 of any pitcher with at least 40 innings.

"Honestly, I try not to think about it," deGrom said. "I try and go out there and put us in a position to win."

In all nine of his starts this season, deGrom has not permitted more than one earned run. This was the 50th time in his career he struck out 10 or more in a game.

DeGrom threw 33 pitches of 100 mph or more, according to MLB Statcast, the most of any pitching in an outing since pitch tracking began in 2008 and four more than the previous high by St. Louis relieve Jordan Hicks against Texas on May 19, 2019.

"It's impressive, I have never seen anything like it," Mets manager Luis Rojas said of deGrom's run this season. "You know you are watching something special."

The Padres had a prime opportunity for a big inning against deGrom in the fourth but couldn't cash in. A single, walk and an error by Lindor at shortstop loaded the bases with one out, but deGrom buckled down and struck out Will Myers and Tucupita Marcano to escape and keep the game scoreless.

"I was just able to locate. I had a good feel for the fastball," deGrom said. "I felt good most of the night, except for those last couple of innings. I could tell my arm was starting to drag a little bit. "

DeGrom's only downfall on this evening: He went 0 for 3 at the plate, lowering his batting average to a still-lofty .391.

After the Padres won the first two of the four-game series matching two of the NL's best teams, the Mets bounced back deGrom and solo homers by Lindor and Jose Peraza in the fifth off Joe Musgrove (4-5).

"He (Musgrove) ended up missing his slider and I was able to take advantage of it," Peraza said of his home run.

Musgrove, who threw the season's first no-hitter and had yielded only one earned run in his previous three outings, struck out 10 in five-plus innings. He gave up three runs on eight hits as his ERA inched up to 2.33.

"Aside from those two pitches (Mets homers) I felt really good," Musgrove said. "In the fifth inning, I didn't feel like I had the same stuff as early on."

With the Mets up 2-0, Kevin Pillar and Tomas Nido singled to begin the sixth, chasing Musgrove in favor of reliever Tim Hill. Jonathan Villar singled in a run before Hill worked out of the inning.

New York added a run in the ninth when Lindor doubled and scored on a single by Pillar.

San Diego's Jurickson Profar was ejected in the eighth inning after slamming his bat on the ground after a called third strike. It was Profar's first career ejection in his eight years in the majors.

Mets: RF Michael Conforto (hamstring strain) is with the team hitting, according to manager Luis Rojas. There is no set specific timeline for his return.

Padres: OF Trent Grisham (left heel bruise) went through a series of pregame running drills June 5 and is progressing toward a short rehab stint early next week, manager Jayce Tingler said. . C Austin Nola (left knee sprain) has resumed baseball activity, and is expected to ramp up his workload over the next week. Tingler noted that Nola would need a rehab stint before a potential return in late June or early July. It's been a stop-and-start season for Nola, who missed the first four weeks because of a fractured finger on his left hand.