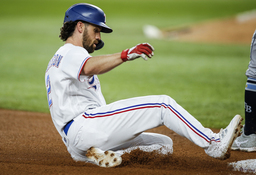 ARLINGTON, Texas (AP) While Rich Hill surely wants to stay in games longer for the Tampa Bay Rays, the 41-year-old lefty has the big picture in mind.

Hill had his second consecutive start of five scoreless innings before four relievers finished off a 3-0 win for the AL-best Rays over Texas on Saturday, when he came out after 59 pitches.

"You guys have been watching the games," Hill said with a smile, when asked if he was OK with manager Kevin Cash pulling him that early again.

"Look, I want to win a World Series. ... Whichever which way that path takes us or however that direction is to get us in that position is what we're trying to do," he said. "Obviously you want to stay in the game and continue to keep pitching. But I'm also here to understand the way the standard operating procedure is here."

Hill (5-2) struck out three and allowed two hits while throwing three more pitches than he did last Monday against the Yankees in New York.

Diego Castillo struck out the side in the ninth for his ninth save in 11 chances, capping the team's fifth shutout victory this season. Texas, which had four hits, was held scoreless for the seventh time.

"The way he has been on this run of suppressing scoring has been really impressive," Cash said of Hill. "Just felt like at that point in the game, the score kind of dictated that we had a really healthy, fresh bullpen, that we could go there and kind of match up from that point. But Rich again set the tone."

Austin Meadows, the third batter of the game, had a two-run single off Kolby Allard (1-2). Manuel Margot hit a solo homer in the eighth for the Rays (37-23), who are 32-15 since mid-April after losing three in a row at home to Texas.

With his 10th team in his 17 big league seasons, Hill has been to the World Series twice - on the losing side with the Los Angeles Dodgers in 2017 and 2018. Hill allowed 16 earned runs over 16 1/3 innings in his first four starts for the Rays, including four runs in 4 1/3 innings in a no-decision at home against Texas on April 15, but has an 0.98 ERA (five earned runs over his 45 2/3 innings) in his eight starts since.

Adolis Garcia walked in the first against Hill, but was caught stealing when trying to advance on a ball in the dirt. Garcia grounded a single through the vacant right side of the shifted Rays infield in the fourth for the first Texas hit. The only other hit off Hill was Charlie Culberson's grounder down the opposite line that rolled into the right-field corner for a triple in the fifth.

Allard, a 23-year lefty in his second consecutive start after 10 relief appearances to open the season, allowed two runs and three hits in a season-high five innings.

After Allard walked leadoff hitter Margot, Yandy Diaz had a single before the single by Meadows, who has 46 RBIs overall - 10 in the past six games, and 37 over a 30-game stretch. The Rays were only 1-of-16 after that against Allard, who finished with six strikeouts and that lone walk that started the game.

Rangers manager Chris Woodward said there is an emphasis made to young starters about treating the first inning almost like it's late in the game.

NOT STOPPING AT 60 THIS TIME

Rangers: C Jose Trevino took a foul tip off his right (throwing) forearm in the second inning. Trevino stayed in the game after taking a few throws. He was lifted for a pinch-hitter in the eight, but Woodward said Trevino was fine.

The Rays will go with Michael Wacha (1-1, 4.63 ERA) starting in a bullpen game after deciding to push back workhorse RH Tyler Glasnow (4-2, 2.69) for an extended break, with the team off Monday before he will now pitch Tuesday. Manager Kevin Cash said there are no health issues and that the move "should not raise any questions." Rangers rookie right-hander Dane Dunning (2-4, 4.67) is set to make his 12th start of the season.