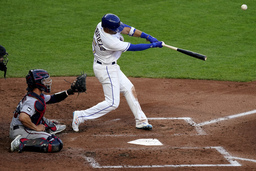 Merrifield started the big burst with a leadoff single and his home run ended the evening for Matt Shoemaker (2-7). He retired just one batter, allowing six hits and two walks.

"It's what I pride myself on which is being well-rounded," Merrifield said. "We've known we can do this for a while and now it's just us doing it consistently."

Kansas City made it 13-0 in the second. All nine Royals in batting order had already scored with no outs in the inning.

"It was relentless. It was every guy doing something that looked right," Royals manager Mike Matheny said. "It continued to the second inning and we had 10 guys get hits. Really good at bats right from the top."

Michael A. Taylor drove in three runs for the Royals.

Brad Keller (6-4) got his third straight win and hasn't allowed more than three runs in an outing since April. He went five innings, giving up two earned runs.

Minnesota lost its fourth in a row.

Jorge Polanco hit his sixth home run of the season into the right field fountains in the Twins fifth. Miguel Sano broke an 0-for-24 with a two-run drive and Nick Gordon hit his first career home run.

"I know my parents are excited they were here to witness it," Gordon said. "So cool for them to be here."

Taylor and Salvador Perez had two RBI apiece in the first inning while Andrew Benintendi and Nicky Lopez each had one.

Carlos Santana added a two-run single in the second.

Kansas City has scored at least five runs in its last seven games.

Minnesota: Kenta Maeda (groin) completed a 20-pitch bullpen session and is scheduled to throw another on Sunday.