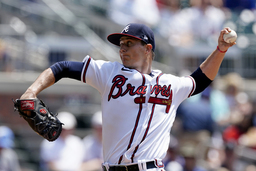 ATLANTA (AP) Dansby Swanson is emerging as a new power contributor in an Atlanta Braves lineup that already leads the major leagues in home runs.

Swanson kept up his power surge with a two-run homer in Atlanta's four-run sixth inning, and the Braves beat Patrick Corbin and the Washington Nationals 5-1 on Thursday.

Swanson extended his hitting streak to a career-best 12 games. He has five homers in that stretch, including in back-to-back games against Washington. The homer landed about halfway up the left-field seats, his 10th this season.

"You forget this kid has some serious power, too," Braves manager Brian Snitker said.

"He works and he believes," second baseman Ozzie Albies said. "It's a matter of when he starts clicking. He keeps believing in himself and believing in his swing."

Left-hander Tucker Davidson, recalled from Triple-A Gwinnett for his second start this season, gave up one hit in 5 2/3 innings with five walks and five strikeouts.

"I just think each start I get I feel a little more comfortable," Davidson said.

Atlanta had two hits off Corbin (3-5) in five scoreless innings before finding success against the left-hander in the sixth.

Ronald Acuna Jr. started the inning with a single, stole second and scored on Albies' single that skipped past left fielder Josh Harrison for an error. Austin Riley drove in Albies from second base with a double down the right-field line.

"Obviously we were cruising there until the sixth," Corbin said. "I still felt good and thought I made some pitches. ... I left the slider up there to Dansby. It was frustrating because I felt really good and wanted to keep us in the game."

Albies drove in two runs with three hits, including a double off Sam Clay in the seventh. The shot off the right-field wall drove in Acuna, who walked.

Josh Tomlin (3-0) threw 1 1/3 scoreless innings after replacing Davidson in the sixth. With two outs in the ninth, Jordy Mercer doubled off Will Smith and scored on Alex Avila's single up the middle.

The Braves and Nationals split the four-game series. Atlanta has won seven of 10 in the season series.

Davidson escaped difficulty in the fifth, when Victor Robles led off with a walk and moved to second on Jordy Mercer's single to right field for the Nationals' first hit. Davidson recovered by striking out Alex Avila and Corbin before Trea Turner's groundout ended the inning.

Nationals: LF Kyle Schwarber was held out of the lineup. He left Wednesday night's game after his right knee locked when diving for a ball. Manager Dave Martinez said Schwarber's knee "was still a little tender" before the game. Schwarber took swings in the indoor hitting cage during the game in case he was needed to pinch hit. "He'll take some more swings tomorrow and see how he feels," Martinez said.

Braves: IF Johan Camargo was optioned to Triple-A Gwinnett to clear a roster spot for Davidson to be recalled. Camargo has no hits in 15 at-bats with six strikeouts this season.

The Nationals fell to 6-24 when scoring no more than three runs, including the two losses in the series against the Braves. "We've got to get some consistency in our lineup and hit like we're capable of hitting," Martinez said. "I know we can hit."

Riley delivered the defensive play of the game in the sixth when he made a diving stop of Ryan Zimmerman's grounder near third base. Riley threw from his knees to Ozzie Albies at second base to force out Harrison.

Nationals: RHP Max Scherzer (4-4, 2.34) will try to continue his success at Philadelphia when Washington opens a series against the Phillies on Friday night. Scherzer is 5-1 and Washington is 7-1 in his eight starts at Citizens Bank Park since joining the Nationals in 2015.

Braves: RHP Ian Anderson (4-2, 3.27) is scheduled to start when Atlanta opens a weekend series against LHP Julio Urias (7-2, 3.61) and the Los Angeles Dodgers on Friday night.