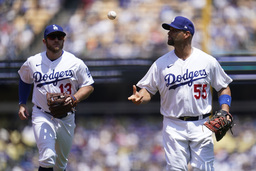 LOS ANGELES (AP) Nothing has stopped Kevin Gausman so far this season. Not even a nagging hip injury.

Gausman capped a stellar May with six shutout innings and Mauricio Dubon hit one of two homers off Clayton Kershaw, helping the San Francisco Giants beat the Los Angeles Dodgers 5-4 on Sunday.

Gausman (6-0) allowed two hits, struck out seven and walked none before he was removed because of left hip tightness. The right-hander said it has been bothering him for most of the season and doesn't anticipate missing his next scheduled start.

"It's a thing that it kind of just grabs every now and then," said Gausman, who helped himself with an RBI single in the fifth. "It kind of pushes the leg down a little early sometimes. That's the only thing that concerns me is sometimes it kind of has a mind of its own and decides what it wants to do."

He joined Jack Coombs (1910 Philadelphia Athletics), J.R. Richard (1979 Houston) and Johan Santana (2004 Minnesota) as the only pitchers in the modern era with eight straight starts of at least five strikeouts and no more than one run allowed.

"He pitched brilliantly, and in a perfect world we just keep running them out there," Kapler said. "Gausman wants the ball so much, except we need to be respectful when his body's not responding the way he wants it to."

Austin Slater also connected against Kershaw (7-4), sending the Giants to their third win in the four-game set after Los Angeles posted a three-game sweep last weekend. San Francisco has the second-best record in the majors at 33-20 and is a half-game behind San Diego in the NL West.

Most expected the Dodgers and Padres to be competing atop the division, but the defending World Series champions are in third place. Los Angeles (31-22) trails San Diego by 2 1/2 games and are two games in back of San Francisco for second.

"Their starting pitching has been really good as well. They have a lot of pieces over there on both sides of the ball," Kershaw said.

The Giants had a 5-0 lead before the Dodgers rallied on a pair of two-run homers by Max Muncy and Albert Pujols.

After surrendering Pujols' homer with one out in the ninth, Jake McGee struck out Will Smith and got Austin Barnes to fly out for his 12th save in 14 opportunities.

After Slater scored on Evan Longoria's grounder in the first, Dubon hit a towering fly ball down the left-field line that hit the foul pole to give San Francisco a 3-0 lead.

When Dubon crossed home plate, he pointed to the sky and then mimicked Dodgers ace Trevor Bauer's sword-sheathing celebration.

Kapler said he had no problem with his shortstop showing emotion and that all of it is meant in good fun.

Kershaw came into the game 24-13 with a 1.79 ERA against the Giants, but allowed five runs for only the second time in 50 starts against the Dodgers' arch rival. The left-hander struck out six, but gave up seven hits and walked three.

It is the second time this season Kershaw has allowed three or more runs in the first inning. The last time it happened multiple times in a year was 2010.

"Wasn't great. When you start the game like that in the first inning and give up three runs, it's tough to come back, especially against a pitcher whose doing as well as Gasuman is," he said. "I put the team in a tough spot and wasn't able to make up for it."

Muncy's two-run shot in the eighth was No. 100 for his career. He has 13 homers this season, with 10 coming in May. He also has gone deep in five of the six games he has played against San Francisco this year.

Pujols' drive to left in the ninth was his 1,357th extra-base hit, which moved him past Babe Ruth for fourth on the career list. It was his third homer since joining the Dodgers on May 17 and No. 670 for his career.

Giants: P Caleb Baragar was placed on the 10-day injured list with left elbow inflammation. Kapler said the left-hander felt some stiffness warming up in the bullpen Saturday. RHP Nick Tropeano was recalled from Triple-A Sacramento.

Dodgers: OF Mookie Betts was a late scratch from the lineup due to allergies. ... Manager Dave Roberts said SS Corey Seager (broken right hand) is taking grounders and throwing, but there is no timeline on when he can resume taking two-handed swings.