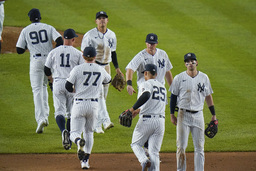 NEW YORK (AP) A poised and confident Alek Manoah dominated the Yankees with six innings of two-hit ball to win his major league debut, and the Toronto Blue Jays beat New York 2-0 on Thursday in a doubleheader opener.

New York rebounded to win the second game 5-3 behind Aaron Judge's tying, two-run homer in the third inning off Robbie Ray and Gary Sanchez's go-ahead solo drive in the fourth.

Marcus Semien and Bo Bichette hit back-to-back homers in the third inning off Domingo German (4-3) in the makeup of Wednesday night's rainout. Bichette provided a 3-1 lead in the second game with a three-run homer, but New York beat Toronto for the third time in nine meetings this year.

A 23-year-old right-hander selected 11th in the 2019 amateur draft, Manoah (1-0) was brought up after throwing only 35 professional innings in the minor leagues.

His mother Susana, wearing a white Blue Jays jersey with her son's name on the back, was part of a cheering section that stood out among the sparse crowd for the late-afternoon start and was visible crying when he faced AL batting champion DJ LeMahieu to start his big league career. She later blew her son kisses from the stands.

"I think everyone was hearing the Manoahs today," the pitcher said with a chuckle.

Manoah became the second Blue Jays starting pitcher to throw at least six scoreless innings in his debut after Mauro Gozzo in 1989.

"I just want to take it all in, and just really enjoy the moment," Manoah said. "Obviously, there's another outing in five days, so I got to get ready for that, but just for today, just want to hug my whole family and I think that's what I'm going to enjoy the most ,is how many people came out to see me, called off (work) sick, made excuses whatever the case may be. They made sure to be here, so I think that's what I'll remember the most."

Manoah walked LeMahieu on four pitches but then struck out Rougned Odor on three pitches, the last a changeup.

"I think those first four pitches were the most nervous, most excitement I had all day, and then after those four, I was kind of like I don't want to suck," Manoah said. "So let's lock it in right here and let's start pitching. Forget about everything else, we got to pitch."

Judge swung so hard in missing a 3-1 fastball that he fell, then was way behind in striking out on a 97.3 mph full-count pitch, Manoah's fastest of the game.

"I kind of spun around. I was trying to hit something to the bleachers instead of just sticking to my approach," Judge said. "He's a great pitcher, and he's going to have a bright future I think with the Blue Jays."

Manoah allowed singles to Miguel Andujar in the second and fifth. He struck out seven and walked two, throwing 60 of 88 pitches for strikes and getting 10 swings and misses. He threw 30 fastballs, 26 sliders, 19 sinkers and 13 changeups.

"I think he was outstanding," Toronto manager Charlie Montoyo said. "When you saw that first walk, you go, OK, let's see how he does after this. After that he was really good."

Jordan Romano worked a 1-2-3 seventh for his second save, finishing a two-hitter in the seven-inning game under pandemic rules. New York did not advance a runner past first as the Yankees were blanked for the second time this season. Toronto pitched its fourth shutout.

After the nightcap, Manoah greeted his cheering section by posing for pictures near the seats down the left field line.

Semien and Bichette gave the Blue Jays a 2-0 lead by hitting 374-foot homers in a four-pitch span.

German allowed two runs and three hits in 5 2/3 innings, dropping to 4-1 in seven starts since he was recalled on April 22.

In the second game, Sanchez put the Yankees ahead 4-3 with a 444-foot drive over the left-field fence on a full count slider from Ray (2-2).

Judge sent a 3-0 fastball onto the netting in Monument Park in center field, a 440-foot drive, and added a sacrifice fly in the fifth.

Jonathan Loiasiga (4-2) got the final out of the fifth and allowed three hits in the sixth in relief of Jordan Montgomery. With closer Aroldis Chapman sick, Chad Green pitched a perfect ninth for his second save.

Judge was thrown out at the plate by left fielder Lourdes Gurriel Jr. in the fifth and Sanchez in the sixth by Bichette from shorstop on a relay from Gurriel - the Yankees' major league-high 25th out on the bases.

Blue Jays: RHP Travis Bergen (left shoulder impingement) was placed on the injured list, retroactive to May 24. ... LHP Tommy Milone (shoulder inflammation) was transferred to the 60-day IL. .... RHP Anthony Kay (blister) who was optioned last week to Triple-A Buffalo was placed on the injured list and is expected to start a rehab assignment Sunday.

Yankees: RHP Corey Kluber (sprained right shoulder) was placed on the injured list and was awaiting a second opinion. ... 1B Luke Voit (oblique strain) was placed on the injured list. ... DH Giancarlo Stanton (strained left quadriceps) is likelyt to be activated Friday. ... Boone said Chapman's illness was not COVID-19 related. It was unclear whether Chapman would travel with the team to Detroit. ... LHP Zack Britton (bone spur in left elbow) will start a rehab assignment Saturday for Double-A Somerset.