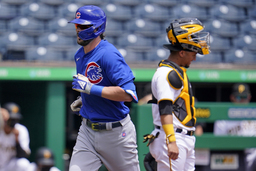 PITTSBURGH (AP) Javier Baez hit reverse and chaos ensued, as tends to happen whenever the livewire Chicago Cubs shortstop is on the basepaths.

The quick-thinking star's latest bit of sorcery led to a comedy of errors by the reeling Pittsburgh Pirates, keying a two-run rally in a 5-3 victory on Thursday.

With teammate Willson Contreras on second and two outs in the third inning, Baez hit a routine grounder to third baseman Erik Gonzalez. Gonzalez's throw to Craig at first was a little up the line, pulling Craig off the bag. No biggie. All Craig had to do was tag Baez or touch first. The inning should have been over.

It wasn't. What followed was 40 seconds of madness that will likely follow Baez and Craig no matter where their careers take them.

Baez hit the brakes to avoid Craig's glove and started backtracking toward the plate. Craig curiously decided to follow Baez.

The move bought enough time for Contreras to round third and sprint home. Craig attempted a flip to catcher Michael Perez, but Contreras slid under the tag while Baez took off for first. Perez's throw to first sailed past second baseman Adam Frazier attempting to cover the bag, allowing Baez to race to second.

At any point in time, if the ball gets to first before Baez does, the out is recorded, the run doesn't count and life goes on. It didn't, encapsulating a season that is quickly slipping away for the Pirates.

"We have to make sure we get the force," Pirates manager Derek Shelton said. "That's just where it's at. I mean, if Baez runs all the way back or runs into their dugout or runs down to the Strip District, we can walk down and touch first."

Baez ended up scoring moments later on a single by Ian Happ to give the Cubs a three-run lead they wouldn't relinquish, adding another chapter to his burgeoning resume as one of baseball's most exhilarating - and occasionally erratic - players in the game in the process.

"I turn to the dugout and everybody was celebrating like I hit a double," Baez said. "It's just great."

Kris Bryant hit his 11th home run, and Patrick Wisdom added his first home run since 2018 for the Cubs, who have won eight of nine. Contreras, Bryant and Wisdom finished with two hits each.

Hendricks improved to 4-1 with a 2.67 ERA, part of an overall surge by the Cubs following a sluggish start that has them fighting with St. Louis for early control of the NL Central.

"These guys have figured out who they are and settled into the season," Ross said. "I think we figured some things out as well."

Tyler Anderson (3-5) dropped his second consecutive decision thanks in part to Craig's baffling decision and a little bit of bad luck. Anderson appeared to hit Wisdom leading off the fourth, a call that was reversed to a foul ball on replay. Four pitches later Wisdom sent a fly ball over the fence in left-center field to make it 4-0. The homer was Wisdom's first in the major leagues since Sept. 15, 2018 when he played for St. Louis.

Anderson surrendered four runs - three earned - four hits and a walk with four strikeouts in five innings. Reynolds and Polanco went deep on back-to-back pitches from Hendricks in the fifth. Perez, who came in hitting just .098, pulled the Pirates within one with a home run in the seventh.

Pittsburgh loaded the base in the eighth but couldn't pull even and lost for the ninth time in 10 games. The Pirates are 6-20 since scratching above .500 at 12-11 a month ago.

"We still had a chance to win the game," Shelton said. "I think the one thing about our guys is they're resilient. They came back. We had a couple of opportunities. They continue to fight. There was no lack of effort. They continue to get after it."

Cubs: Held 1B Anthony Rizzo out of the lineup for a second straight day with lower-back tightness. Rizzo has been dealing with some stiffness recently and it popped back up again Wednesday morning.

Cubs: Return to Wrigley Field for a three-game set against NL Central rival Cincinnati on Friday. Adbert Alzolay (2-4, 4.30 ERA) gets the nod for Chicago.

Pirates: Begin a three-game series against Colorado on Friday. Mitch Keller (2-6, 7.41) will try to break out of a funk in the opener. Keller is 0-3 with a 9.45 ERA in his last three starts.