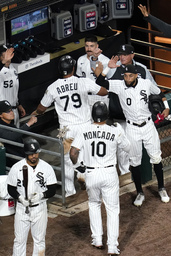 Cease (3-1) threw a career-high 111 pitches and allowed one earned run over six innings. He stumbled following a 19-minute rain delay before first pitch, allowing a single and hitting a batter before retiring his next eight and 15 of the next 18.

"I'm always trying to take something out of it to improve," Cease said. "You leave with a win and you put the team in a good position."

Baltimore's Trey Mancini was hit by a pitch in the first inning and left with a bruised right elbow. X-rays were negative. The first baseman entered Thursday second in the majors with 42 RBIs a year after being diagnosed with colon cancer.

Billy Hamilton gave Chicago a 2-1 lead with an RBI single grounded up the middle against Dillon Tate (0-2) in the sixth.

Jose Abreu doubled in a run and Mercedes plated two more with a double in the seventh.

AL Central-leading Chicago bounced back after losing to St. Louis on Wednesday and still has not lost consecutive games at home this season.

"Right now we're finding out about our players," Orioles manager Brandon Hyde said. "We're facing really good competition and struggling offensively some nights. It is what it is right now."

Mercedes hit his seventh home run of the season in the second inning, drilling Zimmermann's 3-0 fastball into left field to give Chicago a 1-0 lead.

Freddy Galvis tied it in the fourth when he hit Cease's knuckle curve just over the right-field fence for his seventh home run of the season.

Cease allowed two hits to start the sixth inning before getting out of a jam with two strikeouts and a flyout to center field. The right-hander allowed four hits with two walks.

"He felt good, we thought he was throwing the ball well," White Sox manager Tony La Russa said. "He had worked out of that thing. (White Sox pitching coach) Ethan Katz and I both thought he was capable to get an out or two. He got three."

White Sox: Kopech (left hamstring) had imaging done and La Russa remained optimistic and said they will know more Friday. ... SS Tim Anderson (left thumb soreness) missed his second straight game. The White Sox said he should be back Friday. ... RF Adam Eaton (hamstring) was not in the lineup after exiting Wednesday's game against St. Louis. La Russa said Eaton will have some time off and not be placed on the IL. ... LHP Jace Fry (microdiscectomy) began a rehab assignment with Triple-A Charlotte.