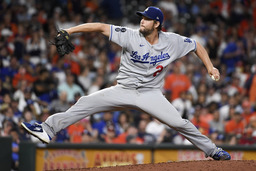 HOUSTON (AP) The last time Clayton Kershaw pitched in Houston, the Los Angeles Dodgers ace was heckled and booed by Astros fans as he trudged off the field in the fifth inning during Game 5 of the 2017 World Series.

Things were much different Tuesday night in his first game against Houston since, when he received a rousing ovation from scores of LA fans after pitching into the eighth inning in a 9-2 victory.

"Everything that's happened in the past has affected them just like it's affected us," Kershaw said. "You could feel it in the way they cheered."

Kershaw (7-3) allowed a run and four hits in 7 2/3 innings, Justin Turner hit a two-run homer and Chris Taylor drove in two runs as the Dodgers got their eighth straight victory.

A crowd of 34,443 piled into Minute Maid Park in the first game open to full capacity since Game 7 of the 2019 World Series, which Houston lost to Washington.

Plenty of Dodgers fans helped fill out the crowd for the rematch of the 2017 World Series - a title Houston won over Los Angeles that was later tainted when it was revealed the Astros illicitly stole signs en route to the championship.

Kershaw certainly isn't over what happened in 2017, but winning his first title last season took some of the weight off his shoulders that he's carried since that loss.

"Anytime you lose a World Series, it doesn't feel good, and then with everything wrapped around it, you don't have the closure that you want," he said. "You're not going to change what happened in 2017 but (winning in) 2020 certainly helped alleviate some of those feelings."

Loud cheers for LA and louder boos for Houston were heard throughout the game. One man in a Dodgers jersey held a sign that read: "Read This Sign ... You Cheated."

Turner refused to acknowledge that Tuesday's win meant anything extra.

"The history between the two teams doesn't go unnoticed, but they all mean the same," he said.

Boos rained down on the Astros when a fan who was given a microphone to get the game going started with: "2017 World Champions" before saying the traditional: "Let's play ball!"

"What's so disappointing is that we didn't make a better show for the people, for our fans here," Houston manager Dusty Baker said. "You saw a number of LA people. We would have loved to have quieted them down by having the lead and winning the ball game."

Kershaw hadn't faced the Astros in the regular season since 2015 but made two starts and a relief appearance against them in the 2017 World Series. He didn't allow a hit until the fourth inning Tuesday, and his only run came on a solo shot by Alex Bregman in the seventh.

"It did feel like a more important game but maybe it was just because it was a full crowd," Kershaw said.

Mookie Betts, who returned after missing a game with a sore shoulder, walked to start the fourth before Turner sent his homer into the bullpen in right-center field to put the Dodgers up 2-0. Turner was animated as he rounded the bases and hit the top of his batting helmet with his hand three times as he hit second base.

The Astros lost their fourth straight game as Jose Altuve went 0 for 4 to snap a 17-game hitting streak, which was the longest in the majors this season and the second-longest of his career.

There were two outs in the sixth when Taylor singled on a ball that sailed just out of reach of a sprinting Altuve into shallow center field to score two and make it 4-0.

The Dodgers added a run with one out in the seventh when Gavin Lux scored on a wild pitch by Joe Smith. Los Angeles padded the lead by scoring three runs on bases-loaded walks in the eighth.

Joe Kelly took over for Kershaw with two outs in the eighth and retired Altuve. His appearance was much more uneventful than the one he had here last July when benches cleared after he threw high-and-tight pitches to both Bregman and Carlos Correa before mocking Correa.

Astros: LHP Framber Valdez, who has been out all season after breaking his left index finger in spring training, made his second rehabilitation start at Triple-A Sugar Land on Sunday. Manager Dusty Baker isn't sure if Valdez will need another start before returning to the team.

Bregman on Kershaw: "He executed good pitches and we didn't really put anything together. He's one of the best ever. He's pretty tough."