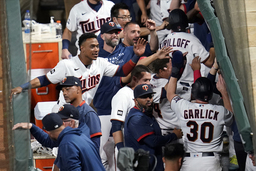 Baltimore's DJ Stewart hit a two-run homer for a 3-2 lead as the first batter following a 45-minute rain delay in the eighth. But Minnesota rallied with six straight two-out hits in the bottom half.

"That was just flat-out awesome to watch," Twins manager Rocco Baldelli said. "Not the easiest types of at-bats, you're facing some guys with really unique, kind of crazy stuff. And our guys went up there and battled."

Jorge Alcala (1-1), who returned to the mound after the delay, allowed two runs and two hits in an inning for Minnesota.

Trevor Larnach and Kyle Garlick homered for the Twins, who had four starters active but not available to start the game due to injury. They have won four of their past five games.

"We're starting to heat up a little bit," Garver said. "Bats are getting hotter. The weather is warming up. The guys are feeling good. And we're going to just keep rolling on that."

The teams opened the three-game series with matching 17-29 records, the worst mark in the majors. Baltimore has lost seven games in a row and 14 of its past 16.

"It was a long delay for our guys," Stewart said. "Just trying to create a little bit of excitement. It just didn't go our way."

Tanner Scott (2-3) gave up two runs in the eighth in relief of Orioles starter John Means. He surrendered a walk and a single while getting just one out. Cesar Valdez entered and blew his fourth save in 12 chances.

"Big homer by DJ to give us the lead," Baltimore manager Brandon Hyde said. "We're just really struggling out of the pen. We've got one guy that's throwing the ball well, Paul Fry, right now, who's down today. We need some guys stepping it up in the pen and get some outs for us."

Larnach reached rare territory with his third-inning home run, the second of his rookie season. Larnach homered into the club seats high above the center-field wall, an estimated 461 feet.

It was the longest home run for Minnesota this season, according to Statcast. He also became just the sixth player to hit a ball into the center-field club.

"His power to the middle of the field is noteworthy even in a major league environment," Baldelli said. "I think we're going to see more of those. I don't think that's going to be the furthest one he ever hits to center field."

Designated hitter Nelson Cruz was out of Minnesota's starting lineup for the fifth straight game as he deals with a wrist injury, but he pinch-hit in the eighth. Second baseman Jorge Polanco missed three games in a row with an ankle injury, but he ran for Cruz in the eighth and finished the game at second base.

Outfielder Max Kepler has a hamstring injury and infielder Luis Arraez is dealing with a shoulder injury.

Orioles: OF Austin Hays was out of the lineup as he deals with a hamstring injury. Hyde said it was precautionary. . RHP Hunter Harvey (60-day injured list, left oblique strain) felt good, according to Hyde, after throwing two innings in his first rehab start for Triple-A Norfolk on Sunday.

Twins: OF Byron Buxton (right hip strain) will begin to ramp up his rehab activities this week. ... RHP Kenta Maeda (right adductor strain) will not throw for a couple of days due to general biceps soreness, Baldelli said.

RHP Jose Berrios (4-2, 3.91 ERA) starts Tuesday for Minnesota, while Baltimore will go with RHP Dean Kremer (0-4, 6.35 ERA). Berrios allowed three runs in five innings in a win against the Los Angeles Angels in his last outing. Kremer surrendered four runs in three innings in a loss to the Tampa Bay Rays in his last start.