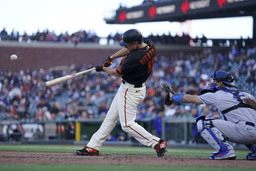 "Walker was fantastic," Dodgers manager Dave Roberts said. "Just really consistent, going after guys and got the punch when he needed. The starting pitching has been fantastic for us all season. We're playing complete baseball."

"I threw strikes, which was my main goal," Kazmir said. "We kind of had the mindset to get two or three (innings). I was able to get some quick outs. All in all I was happy with the outing. It's a proud moment for me."

Muncy stood at home plate and watched as his towering drive off Kazmir in the first inning easily cleared the landing beyond the right-field brick wall and landed in the water.

"It's one of those things that's really cool in baseball," Muncy said "There's not many ballparks out there where there's a cool thing to hit it at. That's one of them."

It was reminiscent of Muncy's splash shot off former Giants ace Madison Bumgarner in 2019 when he lingered near home plate for several moments watching as the ball went out. That display angered Bumgarner, who yelled as Muncy rounded the bases.

Afterward, Muncy quipped, "If you don't want me to watch the ball you can go in the ocean and get it."

Buster Posey homered for San Francisco. The Giants have lost two straight to their division rivals after a season-best five-game winning streak.

Buehler allowed one run and six hits with five strikeouts. He got help from the Dodgers defense with double plays in the first and fourth, then struck out Mauricio Dubon and pinch-hitter Darin Ruff with two on in the seventh.

"I feel good about it. Obviously I ran into a little bit of stuff in the seventh inning but we've got a good bullpen," Buehler said. "We attacked and got into some counts where guys had to put it on the ground."

Alex Vesia retired three batters and gave up Posey's home run in the eighth. Kenley Jansen pitched the ninth for his 11th save.

Barnes homered off Jarlin Garcia in the fifth.

Matt Beaty and DJ Peters drove in runs in the seventh to make it 4-0.

Albert Pujols had an RBI single in the eighth and has had a hit or an RBI in all six games since making his Dodgers debut on Monday.

Buehler improved to 5-0 in eight career appearances against the Giants. All five wins have come at Oracle Park.

The Giants optioned LHP Sam Selman to Triple-A Sacramento. OF Braden Bishop was designated for assignment.

Dodgers: RHP Tony Gonsolin will make a rehab start with Triple-A Oklahoma City on Sunday. Gonsolin has not pitched in the majors this seasons due to right shoulder inflammation. . Cody Bellinger was rested one day after beginning a rehab assignment with Oklahoma City as he works his way back from a fractured left fibula.