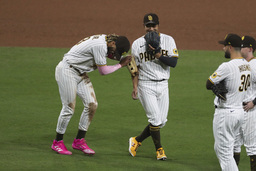 SAN DIEGO (AP) Two runs were already in on Eric Hosmer's bases-loaded single to left field in the fifth inning when Fernando Tatis Jr. came flying around third base and scored when Seattle catcher Tom Murphy couldn't hold onto the throw for an error.

It's the kind of aggressiveness the young superstar has become known for, and the kind that manager Jayce Tingler likes seeing up and down the lineup.

"We're going to play fearless," Tingler said after the Padres beat the Mainers 6-4 Saturday night for their eighth straight win. "We're not going to stop being aggressive, we're not afraid to get thrown out. That's what I love. The way the guys are busting, the way they're running the bases, the at-bats, the defense, the pitching. It's exciting baseball and it's guys pulling for one another, playing with energy."

The Padres, who have baseball's best record at 28-17, can sweep their third straight series if they beat the Mariners on Sunday. Overall, the Padres have won 11 of 12 games. Seattle has lost five straight.

Tatis was thrown out trying to steal third base earlier in the game, but it hardly dampened the Padres' aggressiveness. Jorge Mateo stole third early in the fifth inning, drawing an errant throw from Murphy that allowed him to score the go-ahead run.

The game was tied at 1 when the Padres broke through against left-hander Justus Sheffield (3-4) in the fifth. The Padres scored five runs on four singles, two walks, a stolen base and a sacrifice bunt by Joe Musgrove, a starting pitcher who sometimes is called on to pinch-hit. The Mariners committed three errors in the inning, two after Hosmer singled.

Tommy Pham walked, Jurickson Profar singled and stole second and Tatis was intentionally walked to load the bases. Hosmer hit an opposite-field single to left to bring in Pham and Profar, and the throw got away from Murphy, allowing Tatis to come sliding in to score feet-first.

A second error, on Sheffield, allowed Hosmer to take third. Austin Nola, traded from Seattle to San Diego at the deadline last year, followed with an RBI single.

"I love the way we've ran the bases all year," Tingler said. "We get the base hit to left. Bobby's had some great decisions over there all year, being aggressive and then Tatis just heads up - not only are you running fast, but your eyes are up. As soon as you see the ball get by, before a coach can say, `Go, go, go,' they've already got two steps."

Craig Stammen (3-1) pitched a perfect fifth in relief of rookie left-hander Ryan Weathers for the win.

Dinelson Lamet, who finished fourth in NL Cy Young Award balloting in 2020, came out of the bullpen for the second time in as many appearances. He allowed an unearned run and two hits in three innings while striking out five and walking two.

Lamet, who is being brought along slowly after an elbow issue sidelined him during last season's playoffs, made three starts before the Padres started bringing him out of the bullpen.

Mark Melancon got the final two outs for his majors-leading 16th save.

San Diego rookie Kim Ha-seong hit an RBI double in the second and Mitch Haniger homered for the Mariners leading off the third, his 13th.

Sheffield got his first big league hit when he singled off Weathers with two outs in the second.

Mariners: RHP Robert Dugger and LHP Anthony Misiewicz were reinstated one day after they and two other relievers were placed on the COVID-19 injured list when the team reported a positive case in its traveling party. Manager Scott Servais said Dugger and Misiewicz had vaccinations so they had to be out a day to make sure they were good. Servais said the whole team was tested Friday and again Saturday and hasn't had any more positives. The Mariners did not identify who tested positive. RHPs Will Vest and Drew Steckenrider remain on the COVID IL.

Padres: 3B Manny Machado (shoulder tightness) had his second straight night off and Gold Glove CF Trent Grisham, who came out of Friday night's game with a bruised heel, also got the night off. ... Manager Jayce Tingler said RH reliever Taylor Williams had arthroscopic surgery to repair meniscus in his right knee.