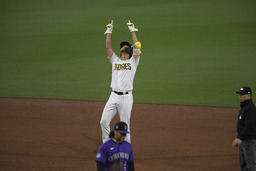 SAN DIEGO (AP) Yu Darvish struck out 10 in seven brilliant innings and also doubled and scored, and Manny Machado hit a two-run homer for the San Diego Padres, who beat the Colorado Rockies 7-0 Monday night for their fourth straight win.

The Padres are 6-1 since last Tuesday, when star shortstop Fernando Tatis Jr. tested positive for the coronavirus before a game at Colorado and right fielder Wil Myers and first baseman Eric Hosmer were pulled from the game. A positive test was returned for Myers while Hosmer was put in the contact tracing protocol.

Darvish ((4-1) held Colorado to just four hits and didn't walk a batter. Only two Rockies made it as far as second base, including Garrett Hampson on a two-out double in the second.

Darvish thrilled the crowd when he doubled into the left-field corner with two outs in the sixth, drawing chants of "YUUUUUUUU!" He raised both arms in the air and pointed skyward after he reached second base. He advanced on Jon Gray's wild pitch and scored when Machado's grounder went between shortstop Trevor Story's legs for an error.

It was Darvish's first hit with the Padres and his third career double - he began the game with an .086 lifetime batting average. He was obtained in a trade with the Chicago Cubs on Dec. 29.

"It was definitely fun pitching out there, not just the results, but it was more about me pitching the way I want to, having that release of what I was looking for," Darvish said through a translator. "When you're able to do that, it's really fun, and I think that kind of lead to me getting that double tonight as well."

"That's probably the sharpest I've seen him in all his outings with us so far," manager Jayce Tingler said. "I thought all his pitches were working, very efficient. I thought he threw some just filthy two-seamers. Obviously he's able to spin the ball extremely well. I just thought he had everything working tonight, which was just great to see.

"It certainly helps having six or seven pitches so he didn't repeat too many of those pitches," Tingler added. "Tonight with everything working, it's a tough matchup for hitters when everything's working like that."

Tingler said the Padres were more impressed with Darvish's double than his 10 strikeouts.

"He can really hit. He plays long toss left-handed and things like that as well," the manager said. "He'll do BP left-handed and his swing's really good. There are some days where he debates hitting lefty. He's a pretty unique, talented dude."

Machado's homer to left off Gray (4-4) followed Trent Grisham's leadoff triple. It was Machado's sixth. Jake Cronenworth then singled for San Diego's third straight hit, advanced on Tommy Pham's grounder and scored for a 3-0 lead when Gray couldn't hold onto the throw on Jurickson Profar's grounder for what would have been the third out.

Machado homered a day after stirring controversy on social media when he slid into St. Louis Cardinals second baseman Tommy Edman to break up a double play in the four-run fourth inning of the Padres' 5-3 victory. Tingler called it a clean play and said Machado did exactly what baserunners are taught to do. Tingler said he thought that play won the game.

Gray allowed seven runs, five earned, and 10 hits in 5 2/3 innings, struck out one and walked one.

Padres: Activated INF/OF Profar and INF/OF Jorge Mateo, who had been sidelined while in contact tracing, and sent INF/OF Ivan Castillo and OF Patrick Kivlehan back to Triple-A El Paso. With Eric Hosmer still in the contact tracing protocol, Profar started at 1B. Tingler said Hosmer could be back on Wednesday.

Rockies: LHP Austin Gomber (2-4, 5.49 ERA) is scheduled to face the Padres in consecutive starts on Tuesday night in the middle game of the series. He got a no-decision in Colorado's 3-2 win Wednesday in the second game of a doubleheader.

Padres: LHP Blake Snell (1-0, 4.19) will try for a third time to get his second win. He got a no-decision in San Diego's 3-2 loss at Colorado in the second game of a doubleheader on Wednesday.